Deprecated: Function Elementor\DB::is_built_with_elementor is deprecated since version 3.2.0! Use Plugin::$instance->documents->get( $post_id )->is_built_with_elementor() instead. in /home/u214178821/domains/sciedutut.com/public_html/wp-includes/functions.php on line 5381
 How to draw CH4 Lewis Structure? - Science Education and Tutorials Skip to content 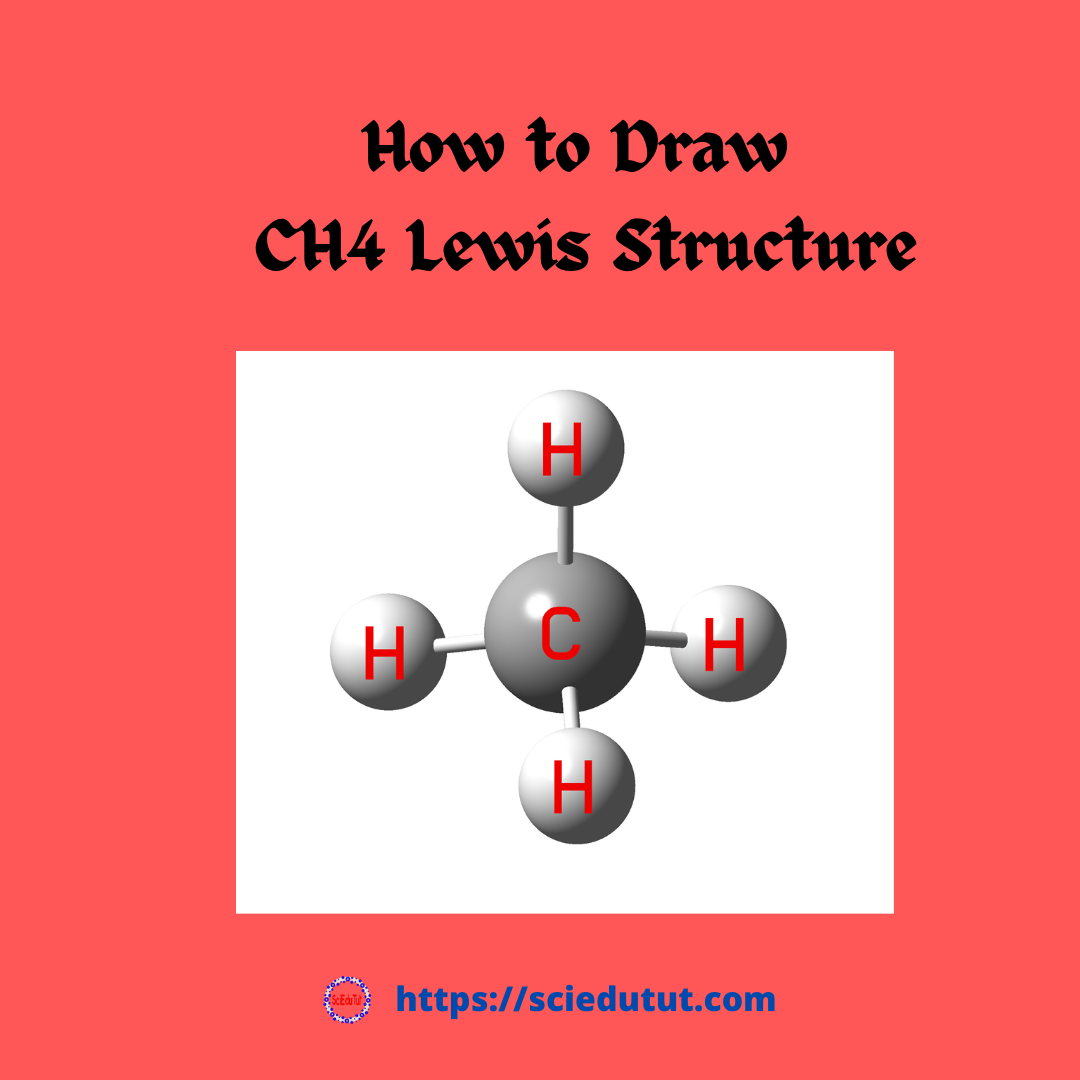 Key Points To Consider When drawing The CH4 Lewis Structure

The CH4 Lewis structure is a diagram that illustrates the number of valence electrons and bond electron pairs in the CH4 molecule. The geometry of the CH4 molecule can then be predicted using the Valence Shell Electron Pair Repulsion Theory (VSEPR Theory), which states that molecules will choose a CH4 geometrical shape in which the electrons have from one another.

Finally, you must add their bond polarities to compute the strength of the C-H bond (dipole moment properties of the CH4 molecule). The carbon-hydrogen bonds in methane(CH4), for example, are polarised toward the more electronegative carbon, and because both bonds have the same size, their sum is zero due to the CH4 molecule’s bond dipole moment, and the CH4 molecule is classified as a nonpolar molecule.

The molecule of methane (with tetrahedral geometry) is tilted at 109 degrees and has a difference in electronegativity values between hydrogen and carbon atoms, with hydrogen’s pull being roughly equal to carbon’s. As a result, it has no dipole moment indefinitely. The CH4 molecule has no dipole moment due to an equal charge distribution of negative and positive charges.

How to draw the CH4 Lewis Structure:

The centre atom is carbon, which is bordered on all sides by four hydrogen atoms. Carbon has four outermost valence electrons, indicating that it possesses four electrons in its outermost shell, whereas hydrogen only has one. To complete the octet of the carbon atom, a carbon core atom requires four electrons. If you’re interested in learning more about the carbon octet rule, please see in our previous post.

Four hydrogen atoms establish covalent connections with the carbon atom as a result, leaving the carbon atom without any lone pairs. There are no lone pairs on the carbon core atom that resist the bond pairs of the four C-H. According to VSEPR theory, no electronic repulsion leads the CH4 molecule to take on a tetrahedral shape like CH3Cl, CH3F, or CH2Cl2.

The CH4 molecule has a total of 8 valence electrons as a result of the foregoing reasoning. With the core carbon atom, the four hydrogen atoms form covalent bonds, leaving the carbon atom with no lone pairs on it.

The tetrahedral geometry and structure of the molecules are similar to that of the chloroform (CH3Cl) molecule because no lone pairs of central carbon atoms create interaction with C-H bond pairs. The bond angle of the H-C-H bond is approximately 109 degrees. The C-H bond has a 108-minute bond length (picometer).

To sketch the CH4 Lewis structure by following these instructions: 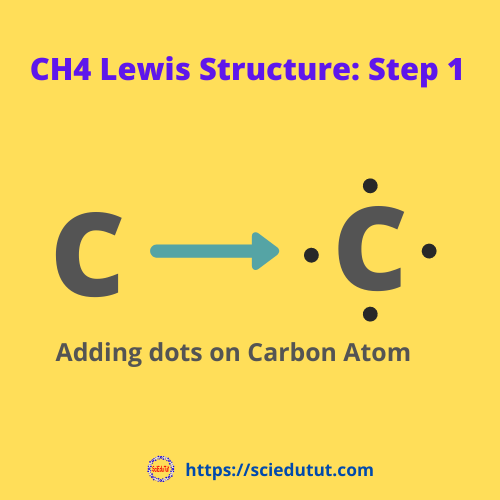 The CH4 molecule has one central carbon atom and four hydrogen atoms. Then the total outermost valence shell electrons can be calculated as follows 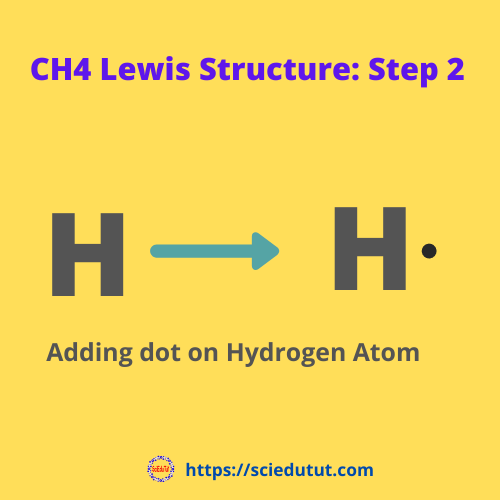 Step-3: Combining step1 and step2 to get step3 for CH4 dot structure

Count how many electrons from the outermost valence shell have been used in the CH4 structure so far. Each C-H bond carries two electrons because each carbon atom is connected to four hydrogen atoms by four C-H bonds. Bond pairings are what they’re called. 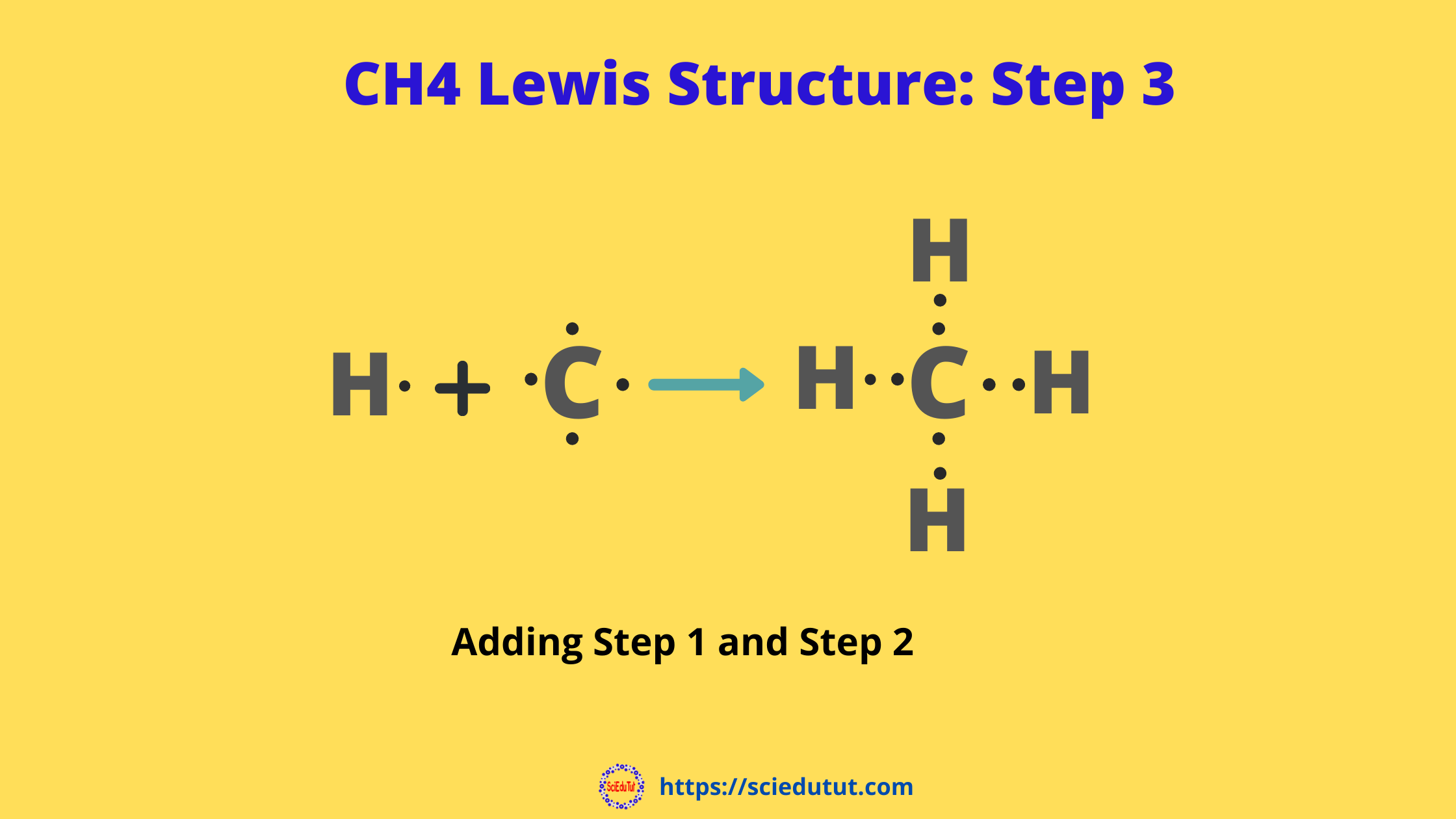 Complete the middle carbon atom octet and, if necessary, apply a covalent bond. The core atom in the CH4 Lewis structure is carbon, which is bonded to the hydrogen atoms by four single bonds (C-H). With the help of four single bonds, it already shares eight electrons. As a result, carbon follows the octet rule and has eight electrons surrounding it.

How to calculate the formal charge on the carbon atom in CH4 Lewis Structure?

To calculate the formal charge on the central carbon atom of CH4 molecule by using the following formula:

L.E(C) = Lone pairs of an electron in the carbon atom of the CH4 molecule.

calculation of formal charge on carbon atom in CH4 molecule

The carbon core atom (four single bonds connected to hydrogens) of the CH4 molecule has four valence electrons, zero lone pair electrons, and eight bonding electrons. Put these values for the carbon atom in the formula above.

In the Lewis structure of CH4, the formal charge on the central carbon atom is zero.

In this post, we discussed about method to construct CH4 Lewis structure. Need to remember that, if you follow above said method, you can construct molecular dot structure very easily.

What is CH4 Lewis structure?

What is the formal charge on CH4 Lewis structure?

6 thoughts on “How to draw CH4 Lewis Structure?”