Sulfur compounds are very different in nature and similar to water. Hydrogen sulfide has the chemical formula H2S. All atoms belong to the non-metal family group in the periodic table and possess a high electronegativity value sulfur atom. Students used to ask “Is H2S polar or nonpolar?”, “H2S Lewis Structure”, “H2S molecular geometry”, “H2S bond angle”, and “H2S polarity”. In this blog post, we are going to discuss the polarity of H2S in a detailed manner.

H2S is commonly appearing at ordinary temperatures and pressures, it exists as a gas with a rotten egg smell. H2S contains one sulfur atom and two hydrogen atoms. Hydrogen sulfide (H2S) is corrosive to biological tissue and metals, and it can also induce a bad odor into the atmosphere. The sulfur atom stays the center of the molecule and the remaining two hydrogen atoms. “Is H2S polar or nonpolar?”, to answer this question, we need a detailed analysis of the polarity of the H2S molecule.

H2S molecule is formed by elements of the oxygen and hydrogen family group in the periodic table. When H2S is exposed to air, it induces an unpleasant odor in the environment and produces white vapors that have a distinct odor and are toxic to breathe. Hydrogen Sulfide (H2S) can generate metal sulfide when it reacts with metal and undergoes sulfide corrosion.

Is H2S polar or nonpolar, then? H2S (Hydrogen sulfide) is polar due to its bent geometrical shape caused by the presence of a lone pair on the sulfur atom. Second, the difference in electronegativity between sulfur and hydrogen atoms causes the S-H bonds to become polar, causing the entire molecule to become polar as well, resulting in a net dipole moment of the H2S molecule is 0.97D. This is less than the water dipole moment. 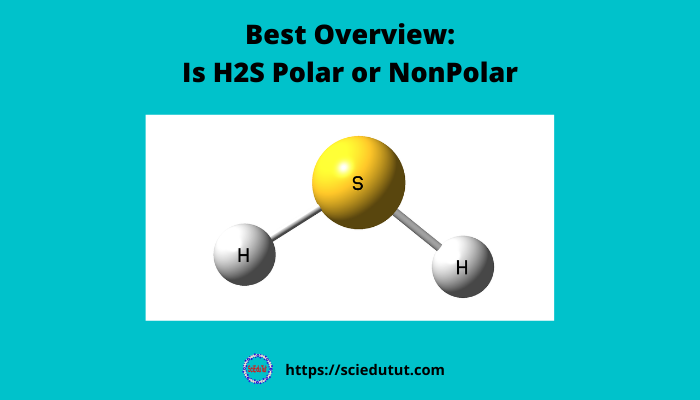 Hydrogen sulfide(H2S) is a gas with a strong intense unpleasant odor. It is created primarily through the acidification of metal sulfide. Sulfur is available to a large extent in coal. Carbonization of coal is the process to treat the coal at high temperatures in absence of air. This makes metallurgical coke. Some by-products are formed during this process. H2S also formed as the product in this process. It is converted into metal sulfide( Iron sulfide)

Iron sulfide (FeS) undergoes further reaction with acid and gives hydrogen sulfide(H2S). The chemical equation of the formation of H2S is shown below.

The chemical composition of the hydrogen sulfide molecule is 2 hydrogen atoms and 1 sulfur atom in the middle.

The core atom is sulfur, which is flanked by two hydrogen atoms. Sulfur contains six outermost valence electrons, which means it contains six electrons in its outermost shell, whereas hydrogen has one outermost electron. The sulfur atom is required two electrons to complete the octet of the sulfur atom. If you want to know about the octet rule, please see in our previous post.

As a result of this, both two hydrogen atoms form covalent bonds with the sulfur atom, leaving the sulfur atom with two lone pairs. The bond pairs of S-H are repelled by the two lone pairs on the sulfur atom. According to VSEPR theory, electronic repulsion causes the molecule’s shape to bend (V-shape), similar to that of the water molecule.

The S-H bond of the H2S molecule becomes nonpolar in nature due to this difference in electronegativity value. The power with which an atom can attract bound electron pairs towards its side is known as the electronegativity of the atom.

As a result of this, the dipole moment of the S-H bond is non zero, and the dipoles of both S-H bonds are not negated due to the V-shaped structure. The total dipole moment of the H2S molecule is calculated to be 0.97 D. Sulfur atoms receive a partial negative charge on it, while hydrogen atoms receive a partial positive charge on it.

As a result of this above explanation, the H2S molecule contains a total of eight valence electrons. The two hydrogen atoms establish covalent connections with the sulfur atom, leaving the sulfur atom with two lone pairs on it.

The lone pairs of sulfur atoms cause repulsion with S-H bond pairs, causing the S-H bonds to face downward force and the shape of the molecules to bend like that of the H2O (water) molecule. The H-S-H bond has a bond angle of roughly 92 degrees. S-H bond has a bond length of 134 pm (picometer).

To sketch the H2S Lewis structure by following these instructions:

Because sulfur and hydrogen belong to the oxygen and hydrogen family group in the periodic table, their valence electrons are six and one respectively.

The H2S molecule has one central sulfur atom and two hydrogen atoms. Then the total outermost valence shell electrons can be calculated as follows

As a result, Hydrogen is the second atom in the hydrogen family group in the periodic table. Sulfur comes second in the oxygen family group. A hydrogen atom has a lower electronegative value than a sulfur atom. Furthermore, hydrogen has a low number of valence outermost electrons. it can never be the central atom in an H2S Lewis structure diagram. As a result of this, place sulfur at the center of the H2S Lewis structure, with hydrogen uniformly around it the V shape structure.

Count how many outermost valence shell electrons we’ve used so far in the H2S structure. Because each Sulfur atom is connected to a hydrogen atom by two single (S-H) bonds, each connection contains two electrons. Those are called bond pairs.

Step-5: Complete central sulfur atom octet and use covalent bond if necessary. In the H2S Lewis structure, Sulfur is the central atom and it is connected with two single bonds (S-H) to the hydrogen atoms. It means it already sharing 4 electrons with the help of 2 single bonds.

So, sulfur is obeying the rule of the octet as 8 electrons around it. Place the four remaining valence electrons around the sulfur center atom as a lone pair of electrons, which is acting as an octet stabilization in this case. 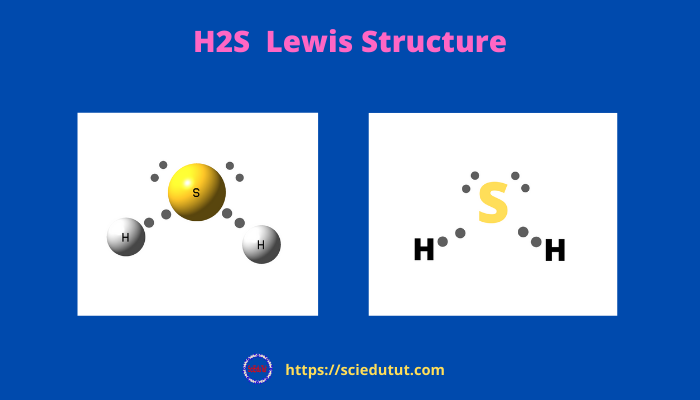 What are H2S electron and molecular geometry?

Because of the two lone pairs of electrons, it gives tetrahedral electron geometry. But the H2S molecular geometry is a V-shape bent form in nature. It is the asymmetrical geometry of the H2S molecule. S-H bonds are nonpolar in nature due to less than 0.5 electronegative difference. That makes, H2S molecule is nonpolar.

How to find H2S molecular geometry

Use the formula below to find the lone pair on the H2S molecule’s center Sulfur atom.

Lone pair on the central sulfur atom in H2S= L.P(S)

In the case of H2S, the center atom, sulfur, has six outermost valence shell electrons and two hydrogen atoms connected to it.

The lone pair on the center sulfur atom of the H2S electron geometry structure is equal to two. It means, the central sulfur atom contains two lone pairs.

The formula of H2S molecular hybridization is as follows:

No. Hy of H2S= the number of hybridizations of H2S

Sulfur, then, is a central atom with two hydrogen atoms linked to it and two lone pairs in the H2S molecule. Then the number of hybridization of H2S(No. Hyb of H2S) can be calculated as follows

Number of hybridization for the H2S molecule is four. one S orbital, and three p orbitals combine together to form the sp3 hybridization.

When the VSEPR theory is utilized to calculate the shape of the H2S molecule, the AXN approach is typically used.

The center sulfur atom in the H2S molecule is denoted by the letter A.

The bound pairs (S-H) of electrons to the core atom are represented by X.

We know sulfur is the center atom with two bound (S-H) pairs of electrons and two lone pairs. because of the H2S Lewis structure. H2S has the general molecular geometry formula AX2N2.

How to calculate the formal charge in the H2S Lewis Structure?

To calculate the formal charge on central sulfur atom of H2S molecule by using the following formula:

L.E(S) = Lone pairs of an electron in a sulfur atom of an H2S molecule.

calculation of formal charge on sulfur atom in H2S molecule

We have 6 valence electrons, 4 lone pair electrons, and four bonding electrons in the sulfur central atom (two single bonds attached to hydrogen) of the H2S molecule. Now put these value of the sulfur atom in the above formula

The formal charge on central sulfur atom of H2S Lewis structure is zero.

The dipole moment of H2S

Dipole moment of H2S can be calculated as follows

Why is H2S a polar molecule?

Due to the existence of two lone pairs on the Sulfur atom, the hydrogen sulfide (H2S) molecule has a twisted V- shape bent form. According to the VSEPR hypothesis, lone pairs and bond pairs repel each other, causing the S-H bonds to move the lower side of the molecular structure, resulting in a V-shaped molecule.

Because of the asymmetric shape of the H2S molecule, the charge is dispersed non-uniformly among the sulfur and hydrogen atoms, resulting in the formation of positive and negative poles across the H2S molecule.

The properties of H2S are listed below

The uses of H2S are listed as follows

Sulfur is more electronegative than hydrogen as mentioned above. This is due to the fact that Sulfur possesses more electrons than the latter. As you may be aware, the electronegative difference of H2S is 0.38, which is regarded as minimal and possesses weak polarity. The H2S molecule is classified as a non-polar S-H bond since there isn’t enough polarity between the atoms.

This is a one-of-a-kind situation that must be taken into account. According to some research, a molecule’s electronegativity must be between 0.5 and 2 for it to be polar. But the electron geometry of H2S has an asymmetric tetrahedral V-shape bent structure. This gives, the resultant H2S dipole moment is 0.97 D.

If you have any queries and doubts about this post, please leave a comment. We will get back to you as soon as possible.

FAQ on “Is H2S polar or nonpolar?”

Because the oxygen atom in water is very electronegative and can partially polarise the hydrogen atoms, hydrogen-hydrogen bonds can form between the H2O molecules, resulting in a relatively high boiling point. Because sulphur is substantially less electronegative than oxygen, these bonds do not occur in H2S.

which molecule has only one lone (non-bonding) pair in its lewis model?

NH3, PCl3 molecules have only one lone pairs in their Lewis model

how many valence electrons does an atom of sulfur have?

what are the electron and molecular geometries, respectively, for hydrogen sulfide, H2S?

Is H2S ionic or covalent ?

It is covalent molecule. The covalent as a bond between a hydrogen atom and a sulfur in the H2S molecule.

1 thought on “Best overview: Is H2S Polar or Nonpolar?”