Deprecated: Function Elementor\DB::is_built_with_elementor is deprecated since version 3.2.0! Use Plugin::$instance->documents->get( $post_id )->is_built_with_elementor() instead. in /home/u214178821/domains/sciedutut.com/public_html/wp-includes/functions.php on line 5383
 Best overview: Is BrF3 Polar or Nonpolar - Science Education and Tutorials Skip to content

Bromine trifluoride has the chemical formula BrF3 and interhalogen compound. It is an inorganic compound. It contains one bromine and three fluorine atoms. All four atoms in this BrF3 molecule have high electronegativity values. The student used to ask “Is BrF3 polar or nonpolar?”, “BrF3 Lewis structure”, “BrF3 molecular geometry”, and “polarity of BrF3”. In this blog post, we are going to discuss these in a detailed manner.

BrF3 has a pungent odor and appearance as straw colored liquid. Is BrF3 a polar or nonpolar molecule in nature? Because the presence of two lone pairs on the bromine atom causes the molecule’s form to be deformed or bent, BrF3 (bromine trifluoride) is a polar molecule. And because the charge distribution between bromine and three fluorine atoms in BrF3 molecule isn’t uniform, the BrF3 molecule is polar.

Interhalogen bromine trifluoride (BrF3) is a chemical with three fluorine atoms and a central bromine atom. It exists in a straw color liquid with a strong pungent odor at standard temperature and pressure conditions. When it comes into contact with water or other organic materials, it reacts quickly. Due to the existence of very reactive three fluorine atoms linked together, it is a potent fluorinating agent in an organic chemistry laboratory. 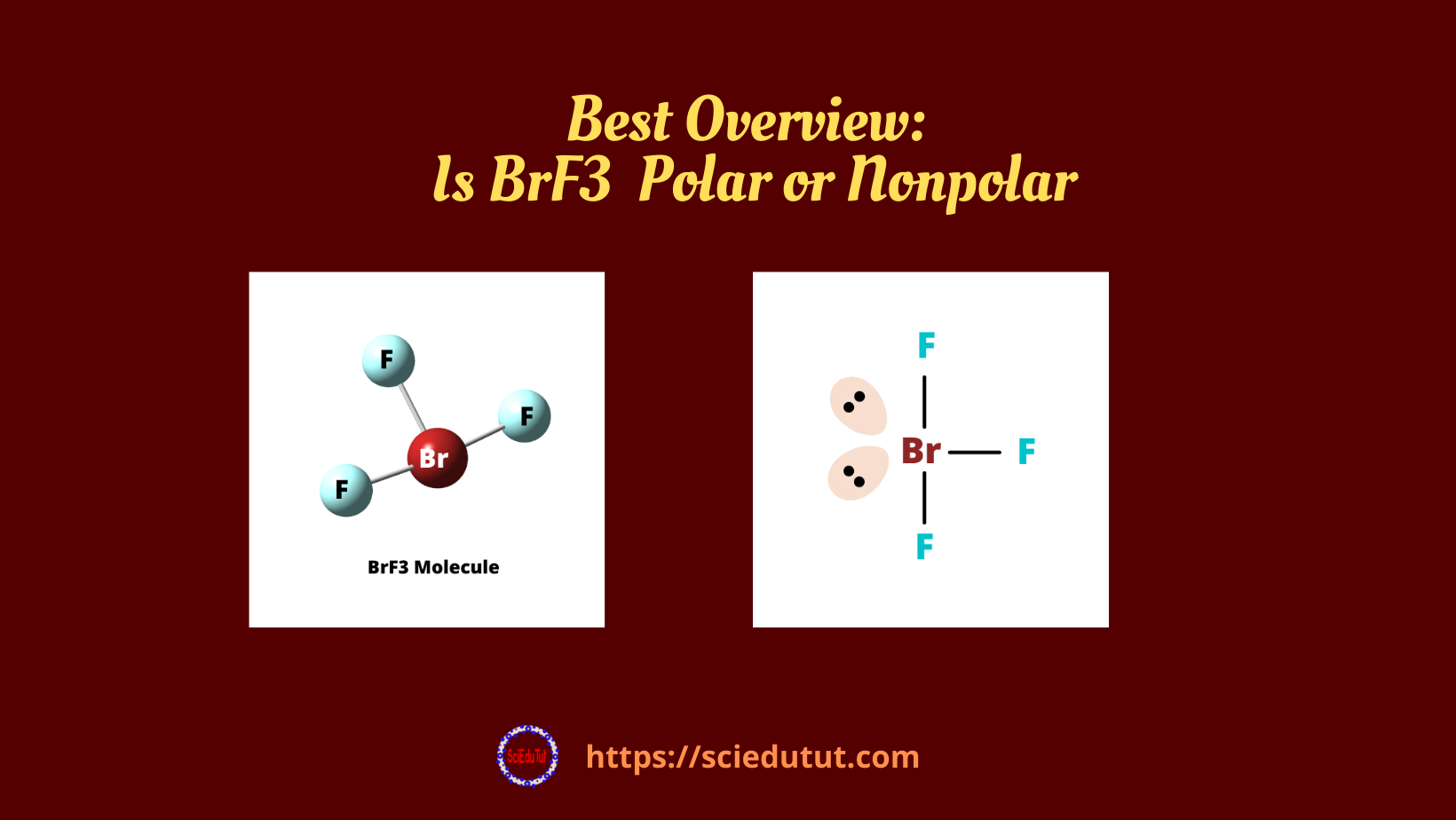 Paul Lebeau, was a well-known French Chemist, was the first to discover it in 1906. It was made by combining bromine vapor and fluorine at the temperature of 20°C. This is a gas phase reaction. Bromine vapor reacted with fluorine gas diluted with nitrogen gas gives bromine trifluoride(BrF3)

The formation of BrF3

It is one of the highly reactive interhalogen compound. The order of chemical reactivity is as follows

It reacted with water very faster way. The reaction of BrF3 with waster as follows

Normally all the oxides of metal and nonmetal are stable compounds. It won’t undergo any chemical reactions easily. But, Bromine trifluoride is a very reactive substance and reacted well with the oxides materials also.

Bromine trifluoride used to prepare polyhalides. another one polyhalides preparation reaction is as follows

BrF3 molecule has a molecular mass of 136.90 g/mol. It is possible to compute it as follows

calculation of molecular mass of BrF3

They both fall in the same halogen family. In their outermost shells, both atoms have seven electrons. It needs one more electron to get a stable octet noble gas configuration. The BrF3 molecule has 28 valence electrons. Three electrons from the central bromine atom of BrF3 molecule covalently bonded with the three fluorine atoms. The remaining four free electrons on the bromine atom form the two lone pairs.

It should be observed that the bromine atom contains two lone pairs on it, which produces shape distortion due to electrical repulsion between lone pairs and bound pairs, resulting in the bent shape in the molecular geometry of BrF3 molecule.

As a result of this, the charge distribution on bromine and fluorine atoms are nonuniform, i.e., unequally distributed. BrF3 molecule is polar. We investigate that further with geometry, Lewis structure, and other polarity related properties.

Lewis structure follows certain rules. One of the main rule is to obey the octet rule. But always there is an exception. Due to the low electronegative value of bromine atom as compared with a fluorine atom in BrF3 molecule. Bromine and fluorine atom has seven valence electron. 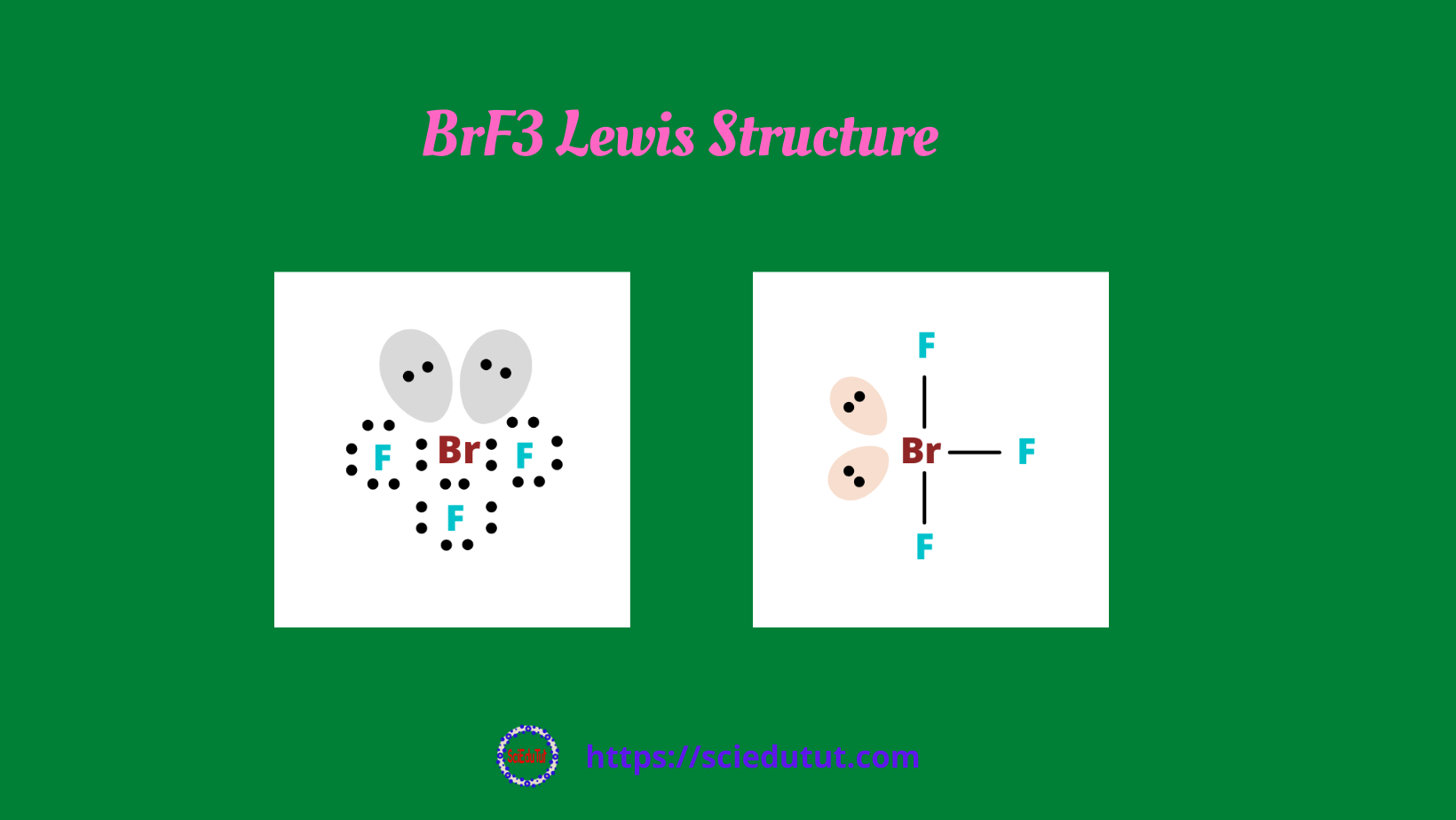 In this blog, you can see more Lewis structure of H2O, NH3, NH4+, and SF4 molecules.

Bromine trifluoride is a powerful very reactive interhalogen chemical that is often employed as a strong fluorinating agent for organic synthesis. interhalogen compounds are included with bromine and fluorine. This compound is frequently found in liquid form and has a strong pungent odor.

The core central atom is Bromine, which forms a T-shaped BrF3 molecular structure. To learn more about its physical qualities, chemical properties, and applications, you must first grasp the molecule’s geometry, including hybridization, polarity, and other factors.

To figure out how bromine trifluoride hybridizes, look at the electron configuration of the central bromine atom, which is the center atom in BrF3molecule. It is represented as 1s2 2s22p6 3s23p63d104s24p5 electronic configuration.

However, certain electrons in Bromine are moved to 4d-orbitals in order to make bonds with fluorine atoms. This is due to fluorine’s increased oxidative and polarizable capability of bromine atom, which drives Bromine to promote electrons to the desired d- orbital to form a bond with a fluorine atom. The bromine atom of the BrF3 molecule involves its d orbital in the hybridization.

As a result, the BrF3 molecule’s hybridization is sp3d with trigonal bipyramidal molecular geometry.

BrF3 has a T-shaped or trigonal bipyramidal molecular geometry (as mentioned above), with a bond angle F-Br-F of BrF3 is 86.2°, which is somewhat less than the normal 90°. The angle is generated because the electron pairs repel one other more strongly than the Br-F bonds. It bent the shape of the BrF3 molecule.

Is BrF3 polar or nonpolar?

Because of the relatively large difference in electronegativity values of the fluorine and bromine atoms in the BrF3 molecule, the bonds of Br-F are called polar. The unshared pairs, also known as lone pairs, are situated on the bromine central atom triangle’s plane, resulting in an unequal distribution of negative charge around the center bromine atom of the BrF3 molecule, making the combination highly polar.

calculation of electronegativity difference of Br-F

It is a measurement of BrF3 molecule’s polarity. The formula is as follows:

It’s the sum of the charges on the bromine and fluorine atoms and the distance between the positive pole of bromine and the negative pole of fluorine atom charge centers. This can be easily calculated with computational chemistry. If you interested in the theoretical calculation, please leave the suggestion in the comment section. Bromine trifluoride(BrF3), has a molecular dipole moment of 1.19 D, Its SI unit is the Debye, which is represented by the letter D.

Why is BrF3 a Polar Molecule?

Bromine trifluoride (BrF3) has three fluorine atoms encircling one central bromine atom, as previously stated. The electronic repulsion occurs because the central bromine atom contains lone pairs on it. According to the VSEPR theory, the repulsion between the two lone pairs and three bond pairs exerts a downward force on the Br-F bonds, bending the trigonal bipyramidal geometry form of the molecule.

The polar Br-F bond’s dipole moment is always non zero. Similarly, each of the three Br-F has a dipole with a non-zero value. It is a highly polarized bond due to the electronegativity value of atoms. The BrF3 molecule’s net dipole also appears to be non-zero, with a direction that originates from the Br to the downward direction, i.e. the three fluorine atoms side. The entire BrF3 molecule becomes polar due to the asymmetric structure and polar Br-F bonds.

The properties of BrF3 are listed below

The uses of BrF3 is listed as follows

BrF3, or bromine trifluoride, is a powerful fluorinating agent for chemical reactions with sp3d hybridization in its center bromine atom. It’s a T-shaped molecule with an 86.2° bond angle. The molecule is very polar, and it is mostly utilized to make uranium hexafluoride during uranium processing. It is used to produce interhalogen compounds and polyhalogens. I hope that this article has given you a better understanding of BrF3’s molecular shape and other features.

Is BrF3 polar or nonpolar molecule?

Because of the existence of two lone pairs on the central bromine atom, BrF3 (bromine trifluoride) is a polar molecule with a deformed or twisted trigonal bipyramidal structure. And because the charge distribution on its atoms of BrF3 molecule is non-uniform, the BrF3 molecule is polar in nature.

Is BrF3 polar or non-polar? Because of its highly asymmetric structure, BF3 (Boron Trifluoride) is Polar. It features a Trigonal bipyramidal geometry that has dipole moments of the three BF bonds, resulting in a BrF3 dipole moment is 1.19 D .

What type of bond is BrF3?

Yes, It lookk like T-shape molecule. The bond angle F-Br-F is 86.2 degree.

9 thoughts on “Best overview: Is BrF3 Polar or Nonpolar”