Chlorinated hydrocarbons are generally used as a solvent in the chemistry laboratory. Methyl trichloride or trichloromethane is falling in the same family with the chemical formula of CHCl3. This molecule has three C-Cl bonds, Cl atom is having a higher electronegativity value. The student used to ask ” is ChCl3 polar or nonpolar?”, “CHCl3 Lewis structure”, “CHCl3 molecular geometry”, and “polarity of CHCl3”.

In this blog post, we try to answer all the above said questions in a detailed manner. It is a colorless organic liquid. CHCl3 is not miscible with water and creates a separate organic interracial layer. It gives a sweet pleasant aroma and vaporizes very easily.

Is CHCl3 polar or nonpolar molecule, then? Because of its tetrahedral molecular geometry structure and the difference in electronegativity value of carbon(C), hydrogen(H), and Chlorine(Cl), CHCl3 is polar. Chlorine atoms are more electronegativity value than carbon and hydrogen atoms, and they are located at three of the pyramid’s vertices, pulling the negative charge in their direction, resulting in a polar molecule with a downward dipole. 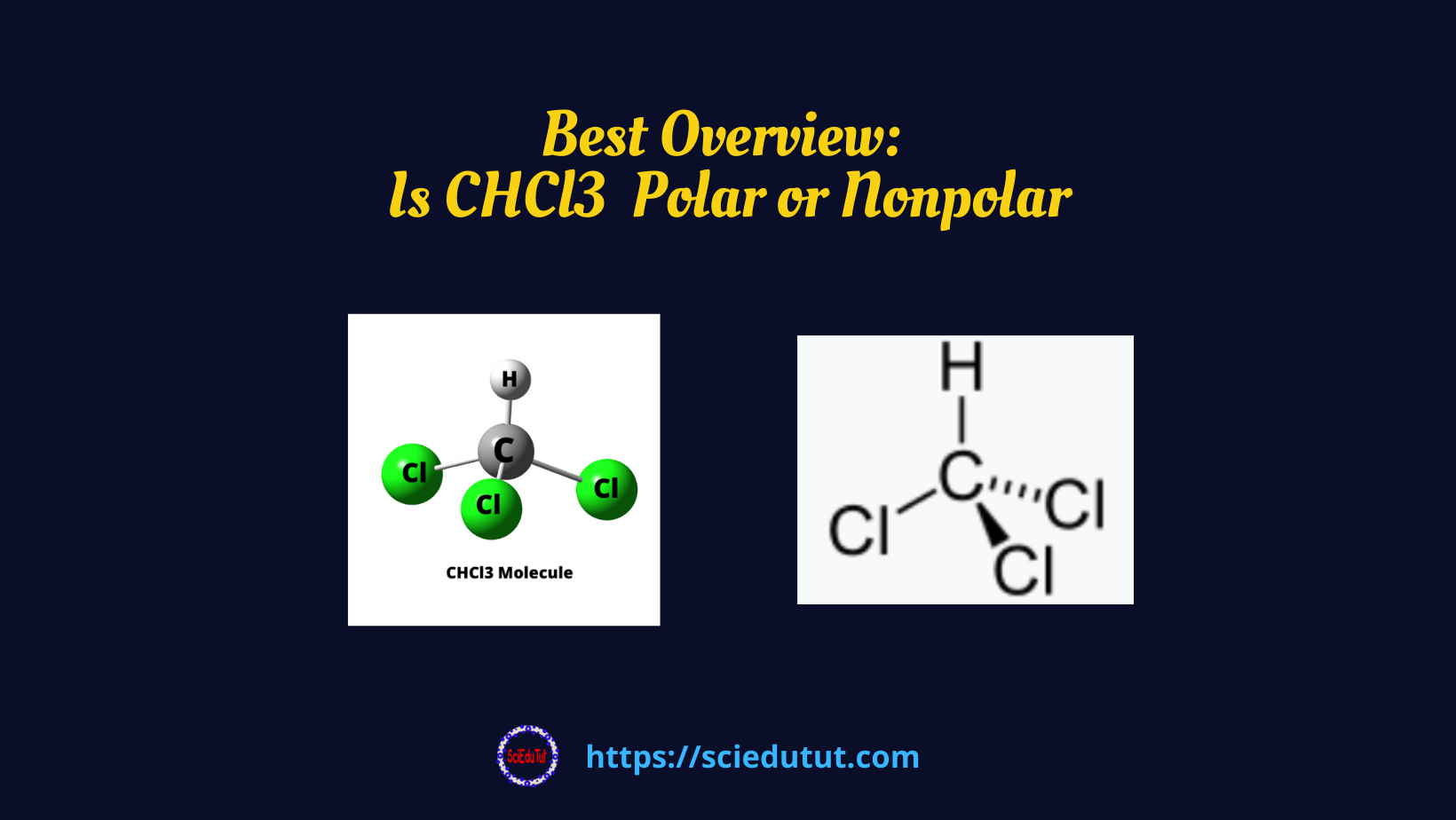 Is CH3Cl Polar or Nonpolar molecule:

Chloroform (CHCl3) is a highly flammable substance that reacts with light and air to produce toxic gas. It is known as carbonyl chloride(COCl2), also known as phosgene gas. During World War II, this gas was used to eliminate the people.

As a result of this, chloroform(CHCl3) should be kept in a dark room with almost nil light penetration, tightly closed bottles up to the brim. It won’t allow the gas to escape from the bottle. It’s often regarded as a strong anesthetic for some surgical applications.

CHCl3 has a molecular mass of 119.37 g/mol. It is possible to quantify it as follows:

The charge distribution on the hydrogen, carbon, and chlorine atoms of the CHCl3 molecule is unequal due to unequal electronegativity value and tetrahedral geometry structure form.

Polar Molecules: Polar molecules are those whose dipole moment value is greater than zero, indicating that they have a permanent resultant dipole moment in the entire molecule. More detailed studies and explanation about polar vs nonpolar molecule is available in our previous post.

Where the electronegativity value of two atoms differs, the covalent bond formed between them appears to be polar. Here, the covalent bond is polar in nature. Polar molecules’ geometry is skewed or distorted, i.e. asymmetric, resulting in irregular charge distribution.

In certain cases, the geometrical structure of these molecules is symmetric. NH3, SF4, and other polar molecules are examples.

In certain cases, the geometrical structure of these molecules is symmetric in nature. BeCl2, Xef4, and other nonpolar molecules are examples.

CHCl3 molecule has one central carbon, one hydrogen atom, and three chlorine atom. Carbon is the central atom of the CHCl3 molecule in its tetrahedral geometry. carbon has four valence electrons in its outermost shell. First around the carbon atom put four dots as a representation of an electron in all four directions. One hydrogen atom with only one electron in its outermost valence shell. 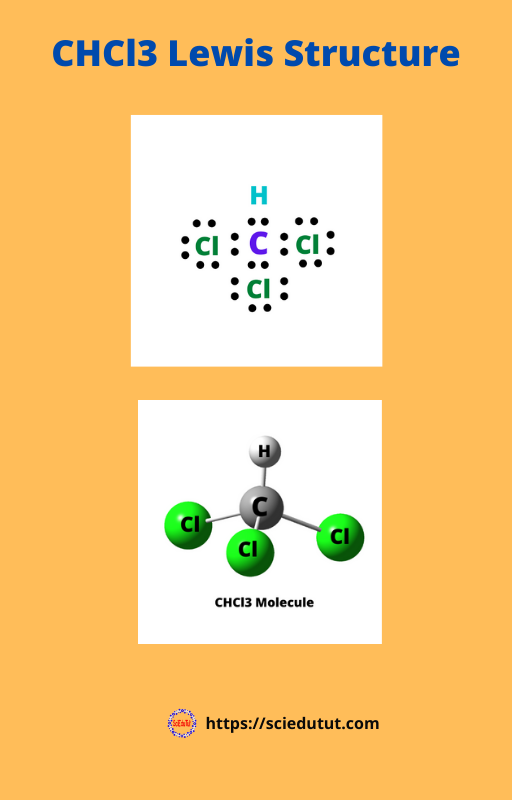 The hydrogen atom goes in the top of the tetrahedral geometry. This is due to the low electronegativity value of hydrogen as compared with carbon and chlorine atoms. Halogen atoms are a high electronegativity value in the periodic table. The chlorine atom has seven valence electrons in the valence outermost shell. It needs one more electron to achieve octet rule configuration. To see more details about the octet rule, please visit in our previous post.

Trichloromethane, with the chemical formula CHCl3, has one carbon atom in the middle, three chlorine atoms, and one hydrogen atom. Carbon takes a central role since it is less electronegative than Chlorine, and the majority of the atoms are grouped around it in all organic molecular geometry.

CHCl3 molecule’s Lewis dot structure shown above in that there are no lone pairs of electrons in its structure. Carbon shares four electrons with the other atoms in the molecule, completing the octet. The molecule has a tetrahedral shape since all three atoms have 26 valence electrons that participate in bond formation.

Assume you’re comparing the electronegative value of carbon and chlorine. In that case, you will find out that the chlorine atom is more electronegative than the carbon atom as it is closer to Flouirne on the periodic table. So there will be a dipole moment between Chlorine and Carbon atom. As Chlorine has more electronegativity, it tries to pull the electrons on its side. This dipole moment results in the unequal distribution of charges on Carbon and Chlorine covalent bonds. Thus C-Cl bond is considered to be polar.

When it comes to the bond between Carbon and Hydrogen atoms, the difference in the electronegativities of both these atoms is relatively small. Already, we discussed in the above section. Due to which the C-H bond is considered nonpolar.

As a result, the three C-Cl bonds is called the polar bond in the CHCl3 molecule. The disparity in electronegativities between Carbon and Hydrogen atoms is relatively small when it comes to the bond between these two atoms. As a result, the C-H bond is regarded as nonpolar in nature.

However, since the three Chlorine atoms have partial negative charges and a net dipole moment, CHCl3 is a polar molecule.

How to check the polarity of the CHCl3 molecule?

If you want to verify CHCl3 molecule’s polarity, make a list of the following points.

To determine the degree of polarity of the CHCl3 molecule, you must record the electronegativity of both carbon and chlorine atoms.

The polarity of CHCl3 molecule is determined in part by its geometrical shape.

Calculation of dipole moment of C-H bond in CH3molecule:

The net dipole moment value of trichloromethane (CHCl3) is 1.15 D.

Why is the CHCl3 Polar?

Because of the reasons listed below, chloroform or trichloromethane (CHCl3) molecule is polar.

As a result of the above discussion, all three chlorine atoms in the CHCl3 molecule give a net dipole in a downward direction of tetrahedral geometry. Therefore, chloroform (CHCl3) is a polar solvent. It is commonly used as a solvent in organic synthesis laboratories.

Trichloromethane(CHCl3), also known as methyl trichloride, is an odorless and flammable liquid. It’s a natural substance and synthetical also manufactured in the industries. It is a colorless liquid with a mildly sweet odor that is only detectable at a certain concentration where it is a natural anesthetic agent.

The important properties of CHCl3 are listed below,

The uses of chloroform(CHCl3) is listed as below,

The electronegativity of the CHCl3 molecule is an important factor in determining whether a CHCl3 molecule is polar or nonpolar. Since three chlorine atoms have a higher electronegativity than the central carbon and top terminal hydrogen atoms, it has a partial negative charge, while the hydrogen atoms have partial positive charges in the te3trahedral geometry. Chloromethane is a polar molecule because its net dipole moment is not zero. The net dipole moment of chloroform is 1.15 D.

FAQ on “Is CHCl3 polar or nonpolar?”

Why is CHCl3 a polar molecule?

Chlorine(Cl) atom is more electronegative value than carbon(C) atom because it is closer to Fluorine(F) atom on the Periodic Table; hence, a dipole arrow is drawn from C to Cl. The CHCl3 possesses a net dipole because the three C-Cl bonds are polar, hence CHCl3 is polar.

Is CHCl3 polar or nonpolar or ionic?

CHCl3 is a polar molecule. Because of its tetrahedral molecular geometry shape and the difference in electronegativity value of carbon(C), hydrogen(H), and chlorine(Cl), CHCl3 is polar molecule.

Is CHCl3 a nonpolar solvent?

Is CHCl3 more polar than water?

It is purely depends on your comparison with what?

Why is CHCl3 more polar than CCl4?

The dipole moment of CCl4 moleciule is zero. Although each four C-Cl bonds are fairly polar in the nature, the CCl4 molecule’s tetrahedral structure causes the four C-Cl bond dipoles to balance and cancelled out. CHCl3 is more soluble in water as compare with CCl4 .Because polar water molecules interact better with polar CHCl3 molecules than non-polar CCl4 molecules. This types of interaction are called polar-polar interaction between the molecules.

2 thoughts on “Best Overview: Is CHCl3 Polar or Nonpolar”