Deprecated: Function Elementor\DB::is_built_with_elementor is deprecated since version 3.2.0! Use Plugin::$instance->documents->get( $post_id )->is_built_with_elementor() instead. in /home/u214178821/domains/sciedutut.com/public_html/wp-includes/functions.php on line 5381
 Best Overview: Is CS2 Polar or Nonpolar? - Science Education and Tutorials Skip to content

Sulfur chemical compounds are very different in nature and properties. Carbon disulfide has the chemical formula CS2. Carbon and sulfur atoms belong to the non-metal family group in the periodic table and possess a high electronegativity value. Students used to ask “Is CS2 polar or nonpolar?”, “CS2 Lewis Structure”, “CS2 molecular geometry”, “CS2 bond angle”, and “CS2 polarity”. In this blog post, we are going to discuss the polarity of CS2 in a detailed manner.

CS2 is commonly appearing at ordinary temperatures and pressures, it exists as a liquid with a colorless and volatile nature. CS2 contains one carbon and two sulfur atoms. Carbon disulfide (CS2) is corrosive to biological tissue and metals, and it can also cause breathing shortness on prolonged exposure it and induces chest pain. The carbon atom stays the center of the molecule and the remaining two sulfur atoms in the terminal of the molecule. “Is CS2 polar or nonpolar?”, to answer this question, we need a detailed analysis of the polarity of the CS2 molecule.

CS2 molecule is formed by elements of the carbon and oxygen family group in the periodic table. When CS2 is exposed to air, it volatiles into the air and unpleasant odor. Carbon disulfide (CS2) undergoes combustion reactions, forms carbon dioxide(CO2) and sulfur dioxide(SO2).

Is CS2 polar or nonpolar, then? CS2 (Carbon disulfide) is nonpolar due to its linear geometrical shape caused by the presence of no lone pair on the carbon atom. Second, the difference in electronegativity between carbon and sulfur atoms causes the C-S bonds to become polar, causing the entire molecule to become nonpolar due to two C-S bond polarity cancels with each other, resulting in a net dipole moment of the CS2 molecule is 0 D. 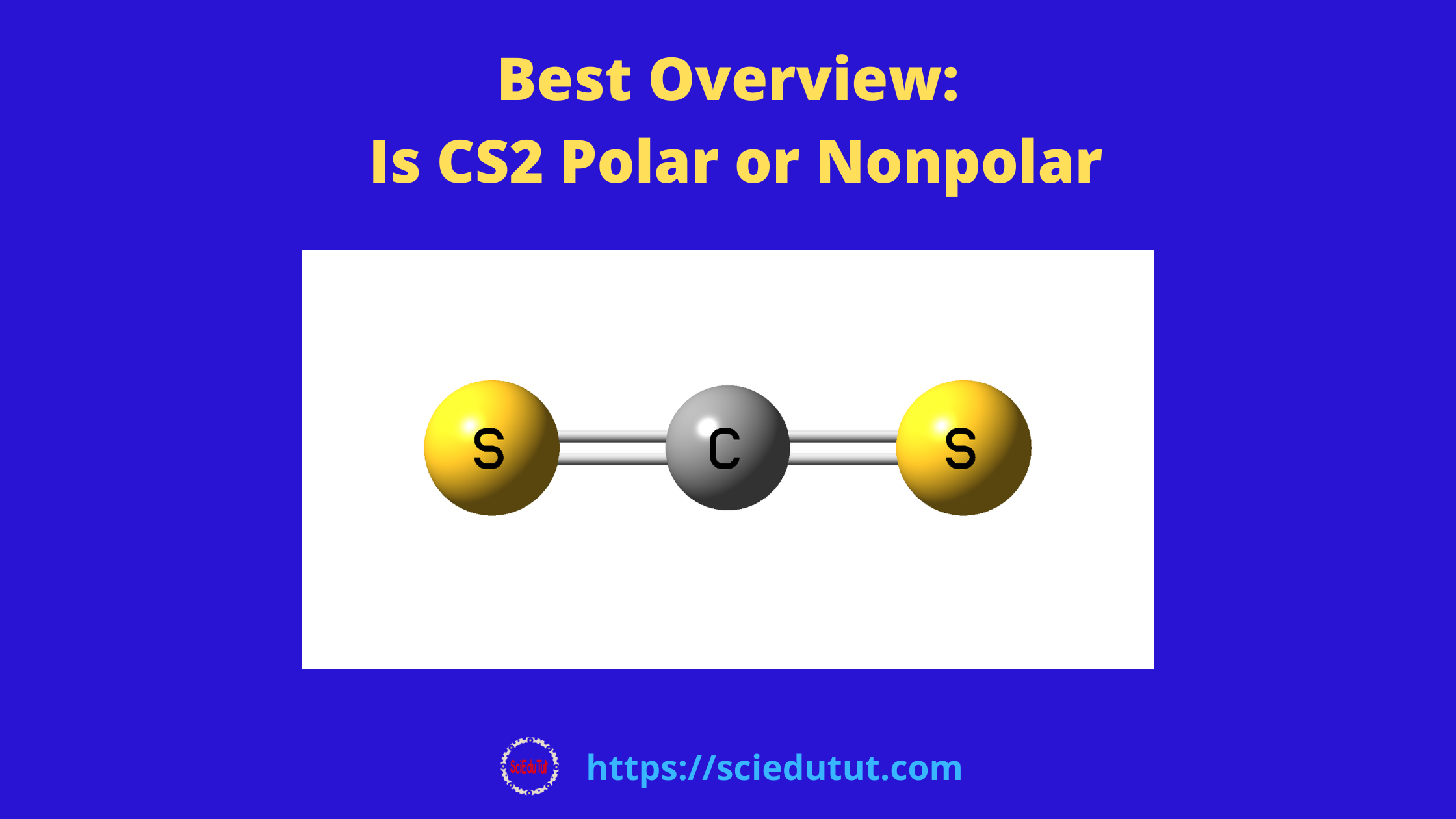 Carbon disulfide(CS2) is a colorless liquid with a strong intense unpleasant odor. It is manufactured primarily through the high temperature heating absence of air. It is the carbonization reaction, sulfur in the solid phase, and coke in the solid phase. Initially, sulfur reacted with carbon (coke) formed carbon disulfide(CS2). This reaction is taken place at a high temperature.

The chemical equation of sulfur and carbon reaction is shown below.

CS2 has a molecular mass of 76.13 g/mol, which may be computed as follows.

The chemical composition of the carbon disulfide molecule is 2 sulfur atoms and 1 carbon atom in the middle.

As a result of this, both two sulfur atoms form covalent bonds with the carbon atom, leaving the central carbon atom with no lone pairs. The bond pairs of C-S are repelled by the no lone pairs on the carbon. According to VSEPR theory, no electronic repulsion causes the CS2 molecule’s shape to linear geometrical, similar to that of the NO2+ (nitronium ion).

As a result of this, the dipole moment of the C-S bond is zero, and the residual dipoles of both S-Cl bonds are negated due to the linear structure. The total dipole moment of the CS2 molecule is calculated to be 0 D. carbon atoms receive a partial positive charge on it, while sulfur atoms receive a partial negative charge on it.

As a result of this above explanation, the CS2 molecule contains a total of 16 valence electrons. The two sulfur atoms establish covalent connections with the central carbon atom, leaving the carbon atom with no lone pairs on it.

No lone pairs of carbon atom cause repulsion with C-S bond pairs, causing the S-Cl bonds to the linear shape of the molecules to form like that of the NO2+ (nitronium ion) molecule. The S-C-S bond has a bond angle of roughly 180 degrees. C-S bond has a bond length of 155 pm (picometer).

To sketch the CS2 Lewis structure by following these instructions:

Because carbon and sulfur belong to the carbon and oxygen family group in the periodic table, their valence electrons are four and six respectively.

The CS2 molecule has one central carbon atom and two sulfur atoms. Then the total outermost valence shell electrons can be calculated as follows

As a result, the sulfur atom is the second atom in the oxygen family group in the periodic table. Sulfur comes second in the oxygen family group. A carbon atom has a lower electronegative value than a sulfur atom. Furthermore, because sulfur is the most electronegative element in the CS2 molecule, it can never be the central atom in a CS2 Lewis structure diagram. As a result of this, place carbon at the center of the CS2 Lewis structure, with sulfur uniformly at two terminals of linear shape structure.

Count how many outermost valence shell electrons we’ve used so far in the CS2 structure. Because each carbon atom is connected to a sulfur atom by two double (C-S) bonds, each connection contains two electrons. Those are called bond pairs in the CS2 molecule.

To complete its octet, sulfur requires 8 electrons in its outermost valence shell. With the help of a double bond, each sulfur already shares two electrons(a total of four electrons). Put 4 electrons around each sulfur atom and you’re done with the sulfur in the CS2 molecule.

So far, we’ve used 16 of the total 16 outermost valence shell electrons available for the CS2 Lewis structure. There is no remaining valence electron to place on the central atom of the CS2 molecule. 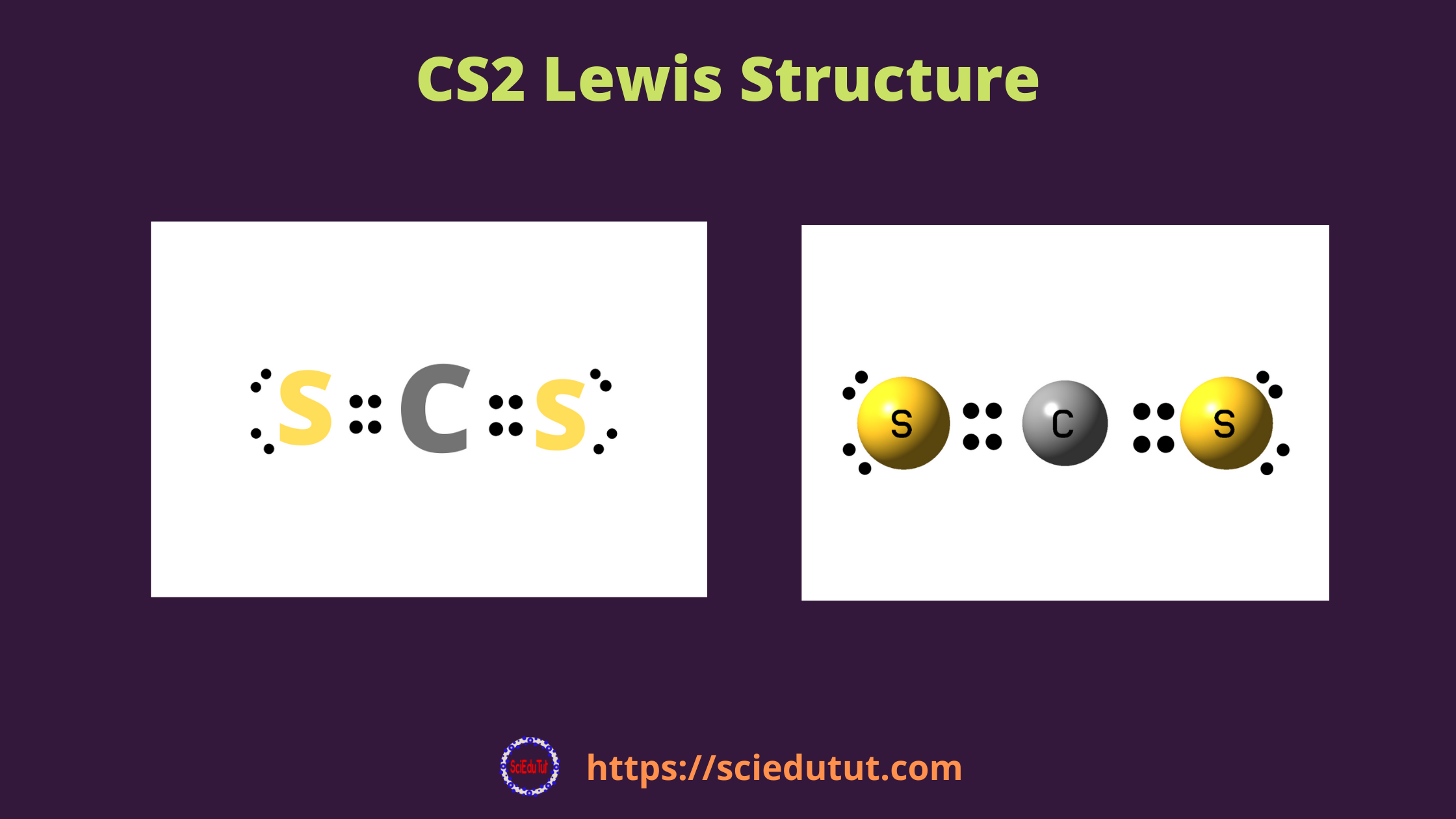 Step-5: Complete central carbon atom octet and use covalent bond if necessary. In the CS2 Lewis structure, carbon is the central atom and it is connected with two double bonds (C-S) to the sulfur atoms. It means it already sharing 8 electrons with the help of 2 double bonds.

So, sulfur is obeying the rule of the octet as 8 electrons around it. Carbon forms a double bond with sulfur atoms. Carbon achieved its octet stabilization due to two double bonds.

What are CS2 electron and molecular geometry?

How to find CS2 molecular geometry

Use the formula below to find the lone pair on the CS2 molecule’s center carbon atom.

In the case of CS2, the center atom, carbon, has 4 outermost valence shell electrons and two sulfur atoms (4 connections in CS2 molecule) connected to it.

The formula of CS2 molecular hybridization is as follows:

No. Hy of CS2= the number of hybridizations of CS2

Carbon, then, is a central atom with two sulfur atoms linked to it and no lone pairs in the CS2 molecule. Then the number of hybridization of CS2 (No. Hyb) can be calculated as follows

The number of hybridization for CS2 molecule is two. one S orbital, and one p orbitals combine together to form the sp hybridization.

When the VSEPR theory is utilized to calculate the shape of the CS2 molecule, the AXN approach is typically used.

The center carbon atom in the CS2 molecule is denoted by the letter A.

The bound pairs (C-S) of electrons to the core atom are represented by X.

We know carbon is the center atom with two double bounds (C-S) pairs of electrons and no lone pairs. because of the CS2 Lewis structure. CS2 has the general molecular geometry formula AX2.

How to calculate the formal charge in CS2 Lewis Structure?

To calculate the formal charge on the central carbon atom of CS2 molecule by using the following formula:

L.E(C) = Lone pairs of an electron in the central atom of the CS2 molecule.

calculation of formal charge on carbon atom in CS2 molecule

We have 4 valence electrons, 0 lone pair electrons, and eight bonding electrons in the carbon central atom (two double bonds attached to sulfur) of the CS2 molecule. Now put these value of the carbon atom in the above formula

The formal charge on central carbon atom of CS2 Lewis structure is zero.

The dipole moment of CS2

The dipole moment of CS2 can be calculated as follows

Why is CS2 nonpolar molecule?

Due to the existence of no lone pairs on the carbon atom, the carbon disulfide (CS2) molecule has a linear geometrical form. According to the VSEPR hypothesis, lone pairs and bond pairs not repel each other, causing the C-S bonds to move the linear form molecular structure, resulting in a linear shape molecule.

The residual dipole moment of S-Cl bonds does cancel out as it does in symmetric CS2 molecules.CS2 has a dipole moment of 0 D across the entire molecule. The formation of a nonpolar molecule is caused by the geometrical structure and the difference in electronegativity value of atoms in the CS2 molecule.

Because of the symmetric shape of the CS2 molecule, the charge is dispersed uniformly among the carbon and sulfur atoms, resulting in the formation of positive and negative poles across the CS2 molecule.

The properties of CS2 molecule are listed below

The uses of CS2 molecule are listed below

Carbon disulfide(CS2) is a linear molecule made up of one carbon atom and two sulfur atoms on each side of the carbon atom with two double bonds. Although the electronegativity of Carbon(2.55) and Sulfur(2.58) differs slightly, making the C-S bonds are slightly polar, the molecule is nonpolar due to the symmetric linear form of the CS2 molecule. Both C-S bonds have equal and opposite dipoles that cancel each other out, making the CS2 molecule non-polar.

If you are having any queries and doubts about the CS2 molecule’s polarity, please leave a comment. we will get back to you as soon as possible.

FAQ on “Is CS2 polar or nonpolar?”

Does CS2 have nonpolar bonds?

CS2 molecule is nonpolar in nature. Due to its linear structure of the molecule. C-S bond shows slight dipole moment. But it cancels with each other.

what type of bond does cs2 have

It has covalent C-S bond

Is CS2 polar or nonpolar molecule

what is the hybridization of the carbon atom in CS2?

3 thoughts on “Best Overview: Is CS2 Polar or Nonpolar?”