Deprecated: Function Elementor\DB::is_built_with_elementor is deprecated since version 3.2.0! Use Plugin::$instance->documents->get( $post_id )->is_built_with_elementor() instead. in /home/u214178821/domains/sciedutut.com/public_html/wp-includes/functions.php on line 5383
 Best Overview: Is NH4+ Polar or Nonpolar? - Science Education and Tutorials Skip to content

Ammonium ion (NH4+) is the simple salt of ammonia (NH3) which is positive in charge. Ammonia (NH3) is a polar molecule. Now, students of chemistry used to ask ” Is NH4+ polar or nonpolar?”, “NH4+Lewis structure”, and “NH4+ molecular geometry”. In this post, we try to answer these questions in the detailed manner.

The ammonium ion (NH4+ cation) has the molecular chemical formula NH4+ and is a positively charged species in an aqueous solution. Now the question is “what is acid and base?”. There are different ways to define them. In the aqueous solution, it can be defined as follows.

Arrhenius give first definition about acid and base. He defined the as

It is a very good definition for an aqueous system. Hydrogen Chloride (HCl) is acid. Another name for this chemical is hydrochloric acid. HCl is present in the aqueous solution. On the other hand, ammonia is the base. Ammonia is a gas in normal atmospheric conditions. But it is soluble in water. Is the polarity of ammonia(NH3) influence the reacitity? check our earlier post on NH3 polar or nonpolar.

Ammonia is soluble in water. so we can can write it as follows 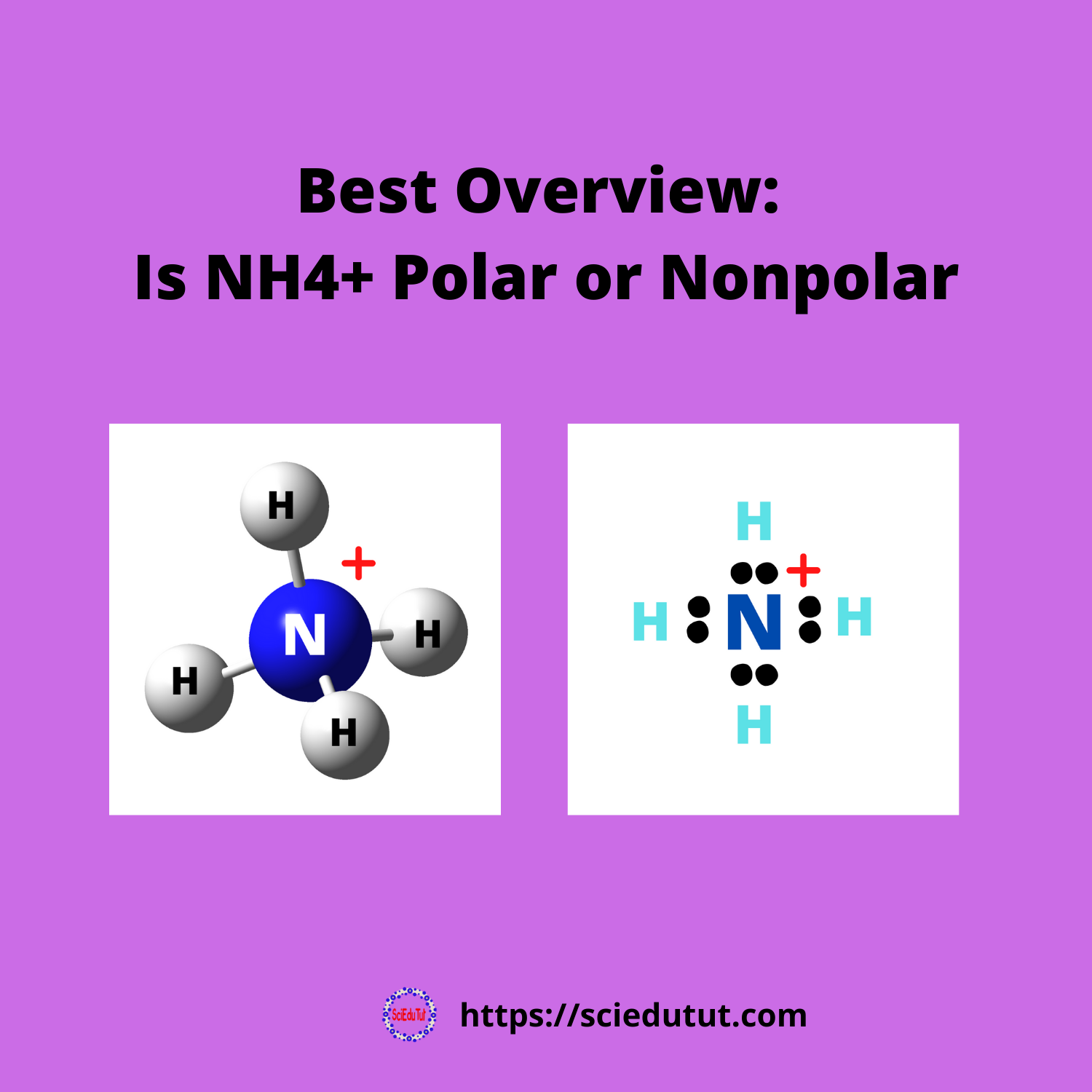 Is NH4+ Polar or Nonpolar, then? Because of its tetrahedral form, NH4+ (ammonium ion) is nonpolar in nature. Since all four hydrogen atoms are symmetrically bound to the nitrogen atom in the tetrahedral geometry, the polarity of the N-H bonds is canceled, yielding a nonpolar NH4+ molecule. But NH3 molecule is polar.

The protonation of ammonia produces the ammonium ion (NH4+). As ammonia reacts with proton donors hydrochloric acid (HCl), it produces ammonium cation as mentioned above. The ammonium ion is oxidized when one hydrogen atom is removed for the cation, resulting in the formation of an ammonia molecule from an ammonium ion. This is the type of decomposition of NH4+ ion. Generally, it takes place at high temperatures.

Ammonia dissociates into ammonium ions when dissolved in water as mentioned above. The equilibrium reaction of ammonia in water is shown in the diagram below.

If the solution’s pH value is higher, then the reaction mixture contains more hydroxide ions. The hydroxide ion removes the hydrogen atom from ammonium ions to form ammonia, shifting the equilibrium to the left side of the reaction.

However, the dipoles cancel each other out due to the symmetrical structure of N-H bonds, resulting in a nonpolar molecule.

Is NH4+ Polar or Nonpolar

Transferring hydrogen ions from hydrogen chloride to the lone pair of electrons in the ammonia molecule produces the ammonium ion (NH4+). Ammonia donates its lone pairs of electrons and H+ ion accepts it. What are ammonia and H+?

Lewis acid and Lewis base:

What is Lewis acid and Lewis base? Lewis acid and base definition differ from Arrhenius definition. But it is applicable in all form of material. We can apply in gas, solid, aqueous, and nonaqueous system also.

Lewis acid and base definition

If you are wondering that is NH4+ polar or nonpolar, this article will help you clarify all your confusion.

Difference Between Polar and Nonpolar Molecules?

The molecules that are covalently bound to each other may have a charge distribution that is both unequal and equal across their atoms in an unsymmetrical manner. A molecule’s polarity is determined by a number of physical parameters, which we’ll go over one by one.

Polar molecules are those that have produced poles inside the molecule. Positive and negative charge terminals are the two poles in the molecule.The charge density distribution on the atoms in these molecules is not uniform.

The net dipole moment of such molecules has a value that is not zero. BeCl2, NH3, and other polar molecules are examples. You should look into the explanation for BF3’s polarity.

Nonpolar Molecules: There are no poles formed by these molecules across it. if it formed also, may canceled each other.In these molecules, the charge distribution over the atoms is uniform in tertrahedral geometry of NH4+ ion.

It’s also conceivable that a nonpolar molecule contains polar bonds, but their polarity cancels out due to the geometrical symmetry of the molecule. N-H bond in ammonium NH4+ molecule is polar in nature. But the the entire NH4+ ion is nonpolar.

Some example of nonpolar molecules is CH2Cl2, XeF4, etc. You can check out the reason for the polarity of SF4 .

Is NH4+ Polar or Nonpolar

Since all hydrogen in the corner of the tetrahedral geometrical structure is the same, ammonium ions (NH4+) are nonpolar molecules. There’s no need for protons or hydrogen to be arranged differently because they’re all arranged the same way as in the normal tetrahedral structure.

All four hydrogen atoms in a tetrahedral structure are arranged in a systematic manner, bonded to the nitrogen central atom in the tetrahedral geometry, and cancel out the N-H bond polarity in all four directions, resulting in NH4+ becoming nonpolar.

In this blog, you will get more information about the polarity of BeCl2, NH3, SF4, BF3, CH2Cl2, the definition of polar vs nonpolar, and Lewis structure of water.

Why is NH4+ nonpolar?

The nitrogen atom is at the middle of the tetrahedral geometry, and all four hydrogen atoms are arranged in the four corners, as shown in the figure. The molecular geometry of NH4+ plays an important role in the polarity of the molecule.

The N-H bond has a definite dipole value, but all four dipoles are pointing in opposite directions to each other in the tetrahedral geometry, and the four dipoles cancel each other out due to the NH4+ molecule’s symmetrical tetrahedral structure form, making NH4+ is a nonpolar molecule.

As a result of the above discussion, even though an NH4+ ion molecular species contains polar N-H bonds, it is possible for it to be nonpolar since the dipoles cancel each other out. Lets discuss about the molecular geometry of the NH4+ molecule.

The NH4+ molecule has a tetrahedral structural form. The total number of valence electrons in NH4+ is eight (Octet rule), with four electrons and four hydrogens occupying the tetrahedral corner. The central nitrogen atom’s bond pairs increase to four due to the addition of one more hydrogen atom, and the lone pairs on the nitrogen atom are zero.

The electron geometrical structure in methane and ammonium is the same, so the form of the ammonium ion structural geometry is considered the same as that of methane. 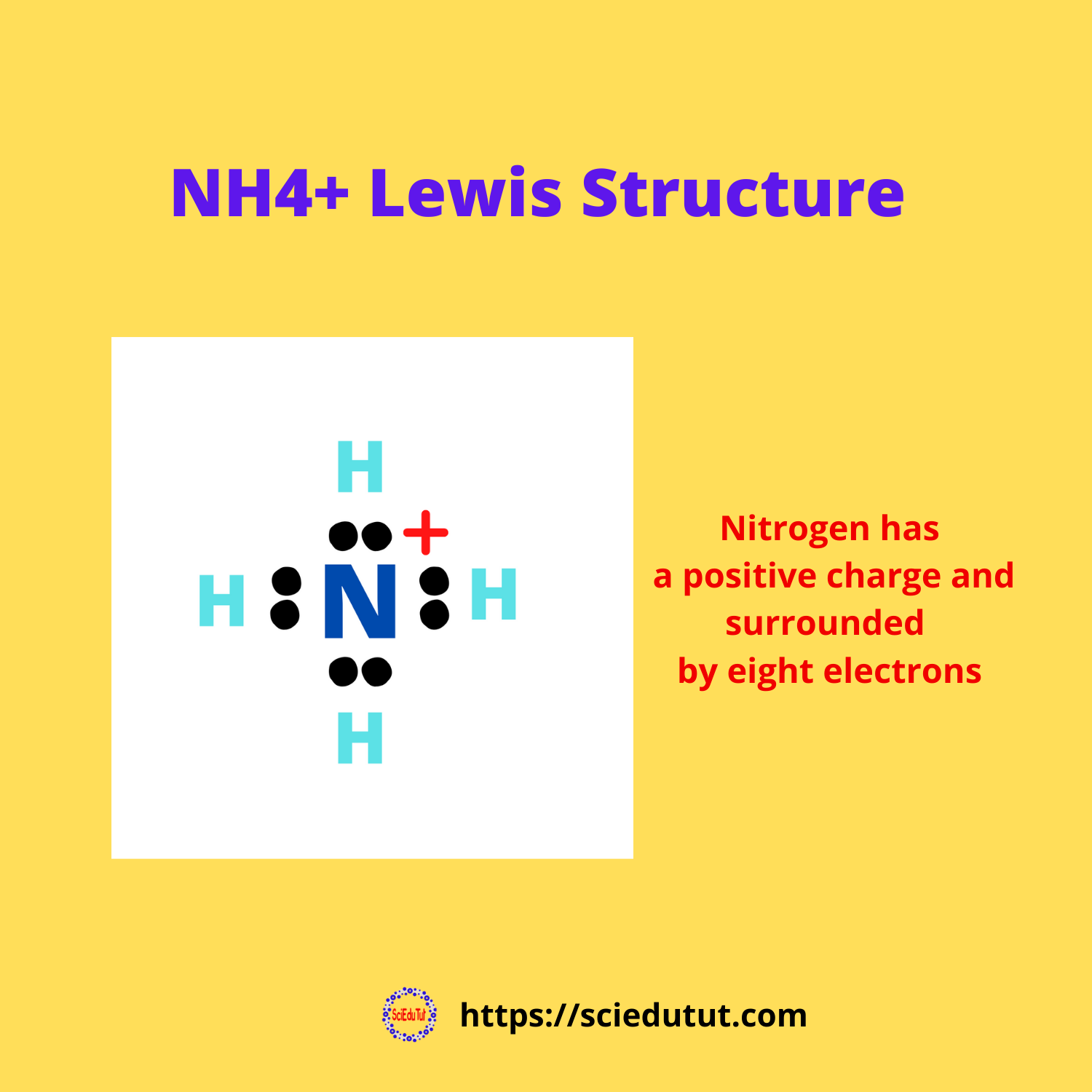 Nitrogen has five valence electrons in its outermost shell and requires three more to complete its octet rule. Hydrogen atom, on the other hand, has one valence electron and needs an additional electron to be a stable NH4+ molecule.

If you see a plus sign somewhere in the above calculation, it means one valence outermost electron has been lost, so 5+1(4)-1=8 means we have a total of 8 valence outermost shell electrons. The number of hydrogen atoms is four, and it is normally found around and on the outside of the nitrogen central atom. Since we have eight valence electrons in the outermost valence shell of NH4+ molecule, you must enter 2,4,6, and 8. If you don’t know how to draw the Lewis structure of NH4+ theoretically,

So, with nitrogen in its outermost valence shell, total electrons become 9-1 = 8 electrons, making the octet rule complete. This octet rule gives a stable structure. The nitrogen atom in the NH4+ molecule is also stabilized as a result of this. All the four N-H bonds in NH4+ ion are arranged in a tetrahedral pattern. H-N-H has a bond angle of about 109.5 degrees which pure tetrahedral structure.

Each of the four N-H bonds in NH4+ ion is symmetrical to the others. The geometrical and Lewis Structural form of the ammonium ion (NH4+) is depicted in the figure.

Parameters that determine the polarity of NH4+ molecule

The electronegativity value difference between the nitrogen and hydrogen atoms that make up a NH4+ molecule determines its polarity. Four N-H bond in ammonium (NH4+) molecule ions are polarised in nature. But as mentioned above, NH4+ molecule ion is nonpolar.

An ammonium (NH4+) molecule’s polarity is measured by dipole of nitrogen and hydrogen atoms. The total dipole of a polar molecule is still greater than zero.

Nonpolar molecules, on the other hand, have a net dipole equal to zero. In ammonium (NH4+) molecule ion is nonpolar in nature. Because of its dipole moment of N-H bond is high in value. Its SI unit is the Debye, which is represented by the letter D. The dipole of Ammonium (NH4+) ion is also 0 D.

If a NH4+ molecule’s form is symmetric tetrahedral geometry, it tends to be nonpolar in nature, whereas asymmetric NH3 molecules tend to be polar. You can check on the post of NH3 polarity.

Similarly, the polarity of all four N-H bonds is canceled out by the symmetrical tetrahedral form of the ammonium ion(NH4+).

Since the nitrogen atom in the ammonium molecule ion has just four N-H bonding orbitals, the hybridization of ammonium ion (NH4+) is SP3. Tetrahedral geometry is SP3 hybridization. Here in ammonia molecule have four sigma N-H bond as shown in the figure.

Since ammonium ( NH4+) molecule has a tetrahedral geometrical structure and NH3 has three hydrogens surrounding the central nitrogen atom, the bond angle of the ammonium ion (NH4+) is greater than that of NH3 molecule. Since the lone pair’s location isn’t as good as the unit lonepair’s, it takes up more room, compressing and shrinking the rest of the conformation of ammonium (NH4+) molecule, is less than the angle of the H-N-H unit in NH4 +.

So a lone pair is less localized rather than bonding pair in ammonia (NH3) molecule, which takes more space and resulting H-N-H bond angle than in NH4+ molecule. 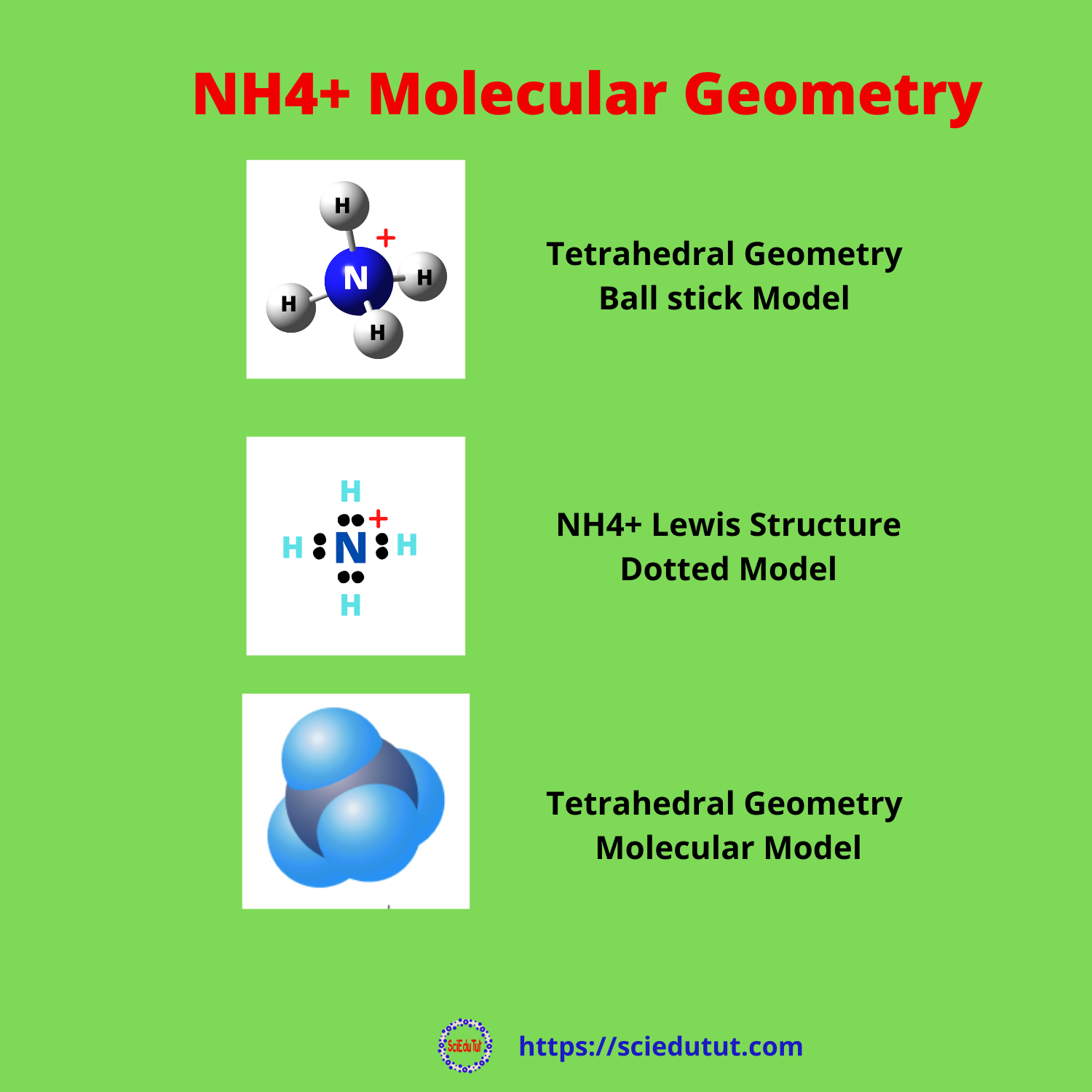 However, due to the symmetrical form of the ammonium (NH+) ion, the dipoles of N-H bonds cancel each other out, resulting in the nonpolar NH4+ molecule ion. The NH4+molecule ion has eight valence outermost shell electrons. The hybridization of ammonium ion (NH4+) is sp3 hybridized, and the H-N-H bond angle is 109.5 degrees.

Since oxygen is more electronegative value than nitrogen, NH3 is stronger than NH4+. If the acid is weaker, it will have a larger conjugate base. Because of the smaller atomic scale and lone pairs of electrons on nitrogen, the NH3 is a weak base as compare to hydroxide ion.

Is NH4+ Basic Or Acidic?

Is it safe to clean with ammonia?

Yes, ammonia is safe for cleaning; however, it is best used to clean burned-on food from floors, microwaves, and ovens. It can also be used to disinfect mirrors and windows. When it comes to price, it is considered to be very low in comparison to other cleaners. But ammonia creates an intense odor.

How do you identify NH4+?

If you want to detect ammonium ions, apply a dilute sodium hydroxide solution to the mixture and gently heat it. It means ammonium ions are present if it converted it to ammonia gas. Choking odour may also be used to identify ammonium ions.

Yes, NH4+ has a salt of acid and weak base and that is nontoxic.

1 thought on “Best Overview: Is NH4+ Polar or Nonpolar?”