Sulfur availability in fossil fuels such as coal. It is commonly used in the thermal power plant and metallurgical industry. During the combustion, it gives sulfur oxides along with carbon dioxide. The general notation for sulfur oxide is SOx. “x” can be the integer. Sulfur trioxide (SO3) is a colorless liquid that is made up of sulfur and oxygen. It can be found as crystals, ice threads, or gas. Sulfur trioxide (SO3) is the chemical compound’s name. The student used to ask that “Is SO3 polar or nonpolar?”, “SO3 Lewis Structure”, “SO3 Molecular Geometry”, and “SO3 bond angle”. we are going to discuss SO3 in a detailed manner.

SO3 is one of the common pollutants, coming out of the combustion of fossil fuel. SO3 contains one sulfur atom and three oxygen atoms. Sulfur trioxide (SO3) is corrosive to biological tissue and metals, and it can also cause fires when it comes into contact with wood, cotton, and other materials. The sulfur atom stays the center of the molecule and the remaining three oxygen atoms. “Is SO3 polar or nonpolar?”, to answer this question, we need a detailed analysis of this molecule.

Because of the trigonal planar form of sulfur trioxide(SO3). Oxygen has atomic number eight in the modern periodic table and six outermost valence shell electrons. Similarly, Sulfur has atomic numbers 16 and six outermost valence shell electrons. SO3 molecule is formed by elements of the same family group in the periodic table. When SO3 is exposed to air, it absorbs water quickly and produces white vapors that have a distinct odor and are toxic to breathe. Sulfur trioxide (SO3) can generate sulfuric acid when it reacts with water.

Because sulfur and oxygen come in the same family group in the periodic table. Both atoms polarise well in the SO3 molecule. The molecules formed with three S-O bonds. These S-O bonds are polar in nature and possess dipole moment.

This is why Sulphur comes in the center of SO3. Similarly here Sulfur atom being the lowest electronegative value atom in SO3 becomes the center atom. Let’s see the Lewis structure of SO3. 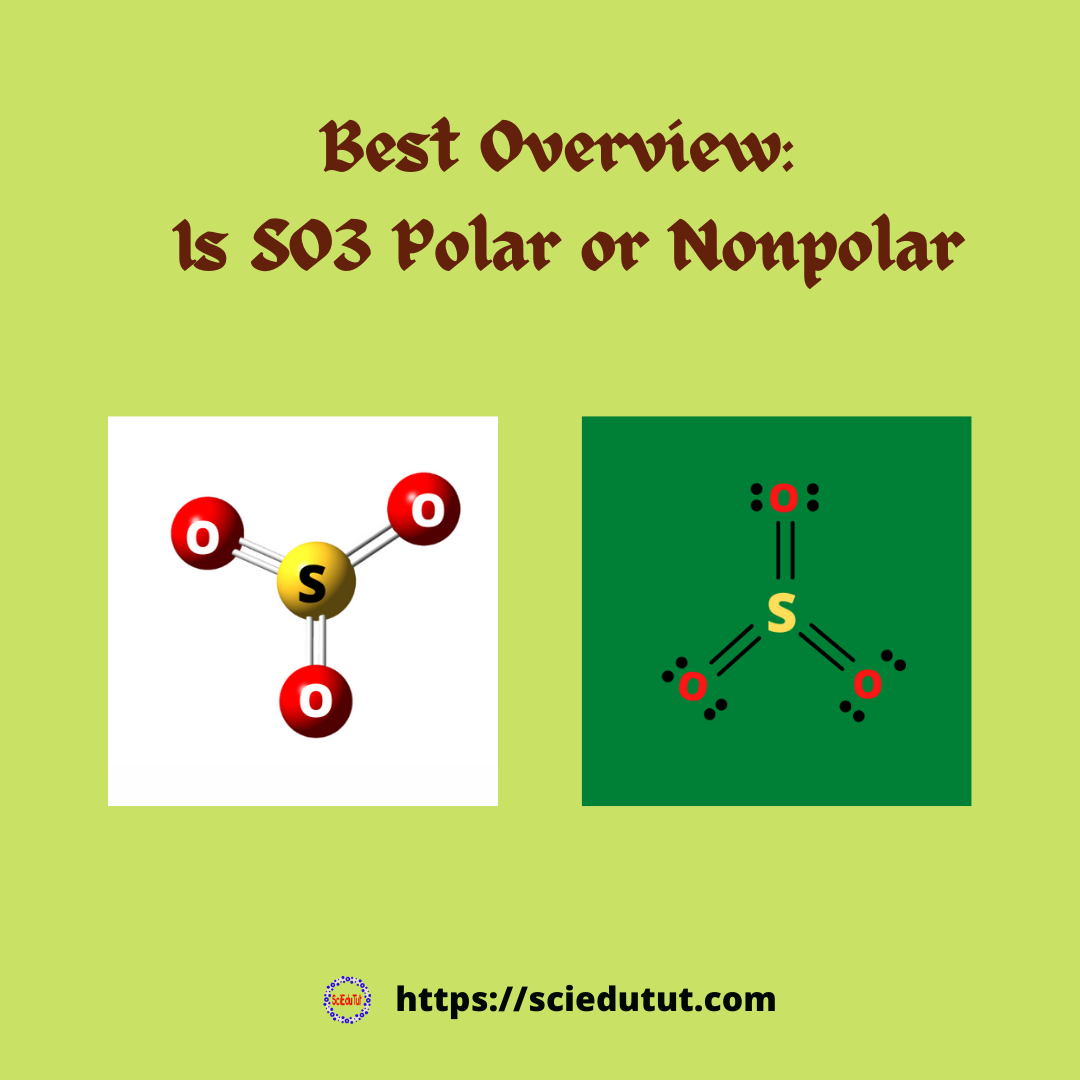 To sketch the Lewis structure of the SO3 molecule, follow the steps below and refer to the figure to help us understand each step in a detailed manner. Because sulfur has the lowest electronegativity value in the SO3 molecule, it is in the middle of the picture, and three oxygen molecules surround it.

The SO3 molecule has one central sulfur atom and three oxygen atoms. Then the total outermost valence shell electrons can be calculated as follows

calculation of total valence electron of SO3 molecule

Because SO3 does not have a charge, oxygen is a more electronegative value than sulfur. That is why, when compared to oxygen, sulfur is considered a weak element in SO3 molecule. The lewis structure of SO3 has constructed bases on the Octet rule.

SO3 has a trigonal planar molecular shape with an asymmetric charge distribution around the core sulfur atom. Sulfur trioxide (SO3) has the O-S-O bond angle of 120 degrees. S-O bond is a double bond. The SO3 molecule has three double bonds. The bond length of S-O is the same for all bonds in the SO3 molecule.

How to find SO3 molecular geometry

Use the formula below to find the lone pair on the SO3 molecule’s center sulfur atom.

calculation for sulfur atom lone pair in SO3 molecule

In the case of SO3, the center atom, sulfur, has six outermost valence shell electrons and three oxygen atoms connected to it. S-O bond order is two.

The lone pair on the centre sulfur atom of the SO3 electron geometry structure is equal to Zero.

The formula of SO3 molecular hybridization is as follows:

No. Hy= the number of hybridizations

Calculation for hybridization number for SO3 molecule

Sulfur, then, is a center atom with three oxygen atoms linked to it and no lone pair in the SO3 molecule. Then the number of hybridization (No. Hyb) can be calculated as follows

No of hybridization for SO3 molecule is three. one S orbital, and two p orbitals combine together to form the sp2 hybridization.

3. Use VSEPR theory to determine SO3 molecular geometry shape

When the VSEPR theory is utilized to calculate the shape of SO3 molecule, the AXN approach is typically used.

The center sulfuratom in the SO3 molecule is denoted by the letter A.

The bound pairs (S-O) of electrons to the core atom are represented by X.

Notation for SO3 molecular geometry

We know sulfur is the center atom with 3 bound (S-O) pairs of electrons and no lone pair. because of the SO3 Lewis structure. SO3 has the general molecular geometry formula AX3.

If the molecule has an AX3 generic formula, the molecular geometry will be trigonal planar, according to the VSEPR theory.

4. Formal charge on central sulfur atom of SO3 molecule:

To calculate the formal charge on central sulfur atom of SO3 molecule by using the following formula:

V.E (S) = Valence electron in a sulfur atom of SO3 molecule

I.E(S) = Lone pairs of an electron in a sulfur atom of SO3 molecule.

B.E = Bond pair electron in S atom of SO3 molecule

calculation of formal charge on sulfur atom in SO3 molecule

We have 6 valence electrons, 0 lone pair electrons, and 12 bonding electrons in the sulfur central atom (3 double bonds attached to oxygen) of the SO3 molecule. Now put these value of the sulfur atom in the above formula

The formal charge on central sulfur atom of SO3 Lewis structure is zero. 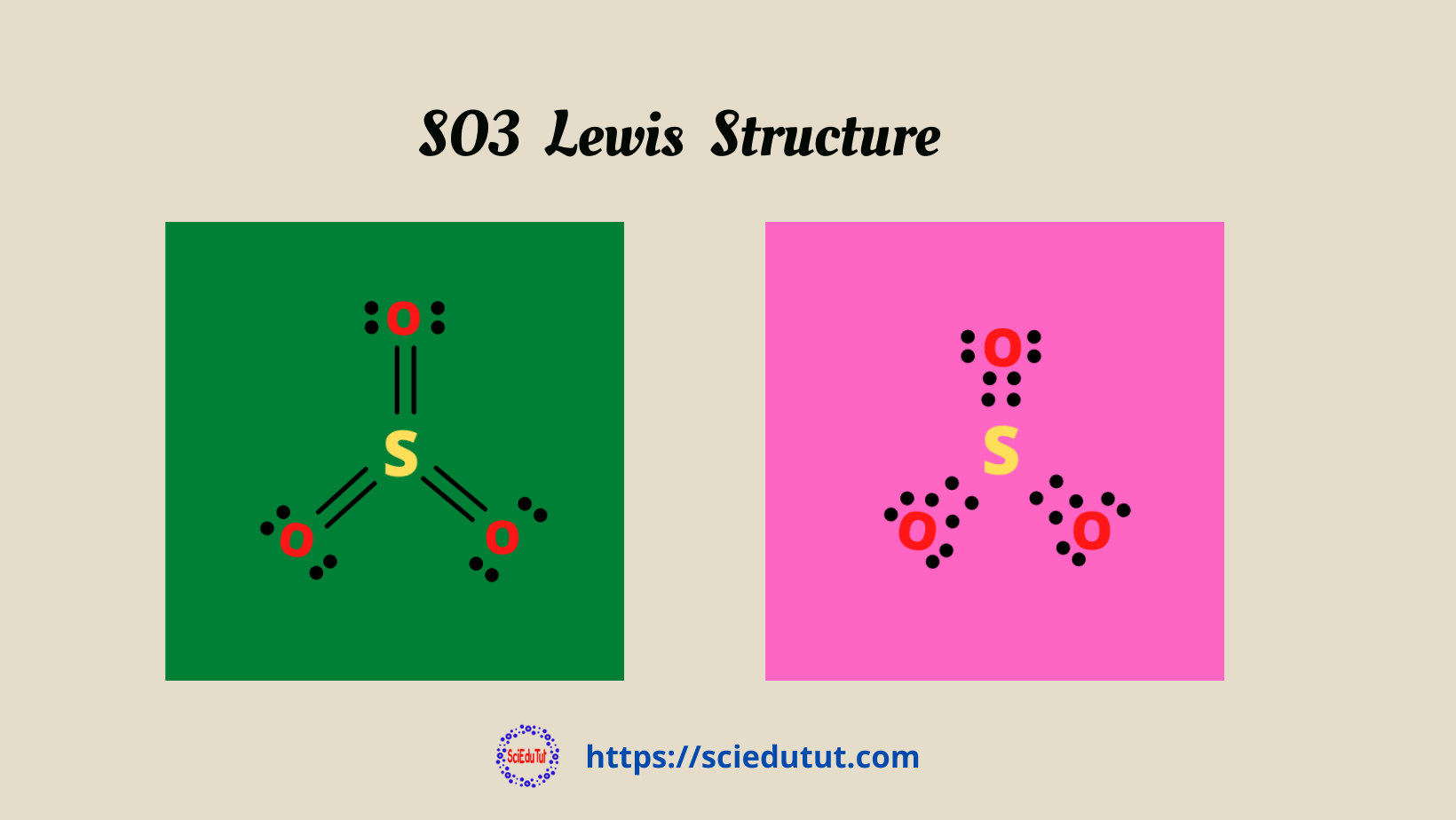 Hybridization Of SO3 molecule

SO3 molecule is a mixture of one sulfur and three oxygen atoms. To comprehend SO3 hybridization, we must first comprehend the bonding between three oxygen and sulfur atoms. In the Lewis structure of SO3, the sulfur atom is in the center and forms three double bonds with oxygen atoms, forming one sigma and one pi bond in each S-O bond. As a result of this, SO3 molecular hybridization is sp2.

Is SO3 Polar Or Nonpolar

It’s also important to understand the polarity of NH3, NH4+, and polar vs nonpolar.

Why is SO3 Non-Polar molecule?

The three pairs of Sulfur establish a double bond with the one pair of all three atoms of Oxygen around the Sulfur atom after bonding in the SO3 molecule. The trigonal planar geometrical shape is formed by three double bonds between the Sulfur and Oxygen atoms. The three S-O bonds created bond angle O-S-O are at a 120-degree angle.

The geometrical shape of SO3 demonstrates its nonpolar nature. The polarity of a molecule is determined in part by the molecular structure of that molecule. Aside from the geometrical structure, other parameters such as lone pairs and the molecule’s dipole moment are utilized to determine whether a molecule is polar or nonpolar.
When it comes to the qualities of sulfur trioxide (SO3), it can be found in a variety of molecular species as well as in crystalline form.

Because Sulfur has the highest oxidation state compared to the other elements in the molecule, SO3 is a powerful oxidizing agent. It is colorless and odorless in the liquid state, and it has a crystalline shape in the solid state.

It operates as a pollutant in its gaseous condition, which can be controlled by using acid rain as an example. Acid rain occurs when precipitation is combined with sulfur trioxide (SO3), which is detrimental to aquatic life as well as humans.

Because of the following factors, SO3 is a nonpolar molecule:

We hope that have answered all of your questions about SO3 polarity (sulfur trioxide molecule). If you have any questions, please leave them in the comments section, and we will respond as soon as possible.

FAQ on “Is SO3 polar or nonpolar?”

Why is SO3 nonpolar and SO2 polar?

Because of the electronegativity value difference between the two elements, the sulphur-oxygen bonds in both SO2 and SO3 are notably polar. But due to symmetrical structure of SO3 becomes nonpolar.With C2v symmetry, the SO2 molecule exhibits a bent shape similar to H2O. It has a net dipole moment, which is equal to the product of the two S-O moments. As a result, the SO3 molecule is non-polar.

Is SO3 dipole dipole?

SO3 is trigonal planar geometry so that the individual dipoles on the S-O bonds of SO3 cancel each other and the molecule has no net dipole moment.

External References on “Is SO3 polar or nonpolar ?”

4 thoughts on “Best Overview: Is SO3 Polar or Nonpolar?”