Ammonia(NH3) is a very well known chemical for chemists and olden days alchemists. NH3 is a gaseous compound. But it is soluble in water and gives liquid ammonia (NH3). The student used to ask “Is NH3 polar or nonpolar? here in this post to investigate the possibilities.

Even though, ammonia was known from olden days. A patent from Germany In 1908, Fritz Haber used a Haber–Bosch method for synthesis of ammonia gas from hydrogen and nitrogen gases with the use of catalysts, for which he was awarded the Nobel Prize in 1918.

Ammonia liquid is a colorless and transparent solution. It gives a very intense pungent smell. It is originated from the breakdown of plant matter and nitrogenous animal waste in nature. Around 15% of the air in the atmosphere is in the form of ammonia gas. It was considered to be a very usable nitrogen source available in nature.

The chemical formula of ammonia is NH3. Three Covalent chemical bonds are found in ammonia molecules. Three hydrogen atoms form a covalent bond with nitrogen. In an ammonia (NH3) molecule, the nitrogen atom has 5 valence electrons in its outermost shell of Lewis structure, while hydrogen has just one electron. Two electrons of nitrogen outermost shell stays as a lone pair of electrons.

It is very well known to all students of science and in particular to chemistry. It has three hydrogen atoms and one nitrogen atom in the center. NH3 commonly used in fertilizer processing, washing, and the creation of nitrogenous compounds. Ammonia and ammonium salts can be detected in small amounts in rainwater during the rainy season.

Apart from our planet earth’s atmosphere, ammonia can be present on all of the planets in our solar system, including Uranus, Jupiter, and Neptune. Jupiter is a massive planet as compared with the earth with ammonia crystals covering its surface due to very low temperature. 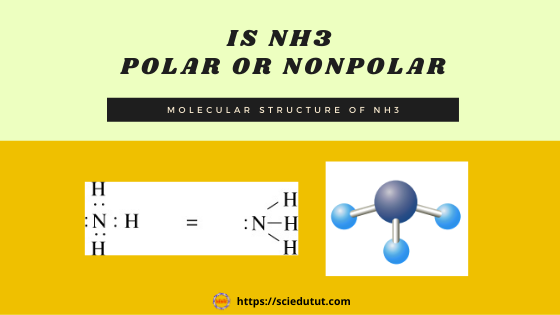 It stays in the gaseous form at room temperature and boils at -33 degrees Celsius. Generally, any chemical compound shows either acidic or basic, or neutral behavior. Ammonia shows the basic character of the material. This creates doubts in student’s minds during the studies on ammonia. They have questions about whether ammonia (NH3) is polar or nonpolar (is NH3 polar or nonpolar).

A molecule of ammonia (NH3) is polar since the nitrogen atoms have a higher electronegativity than the hydrogen atoms and lone pair of electrons on the central nitrogen atom of unsymmetrical trigonal pyramidal structure geometry. It is a really interesting question and the answer are not that simple.

Is NH3 a polar or a nonpolar molecule? Because of its asymmetrical form (trigonal pyramidal structure) and the difference in electronegativities of N(3.04) and H(3.04), the NH3 (Ammonia) molecule is polar in nature. Since the electron charges on the nitrogen and hydrogen atoms are not evenly distributed, NH3 (Ammonia) is a polar molecule with a net dipole moment. It is a vector quantity and indirectly summarises the net resultant electric field of the molecule. 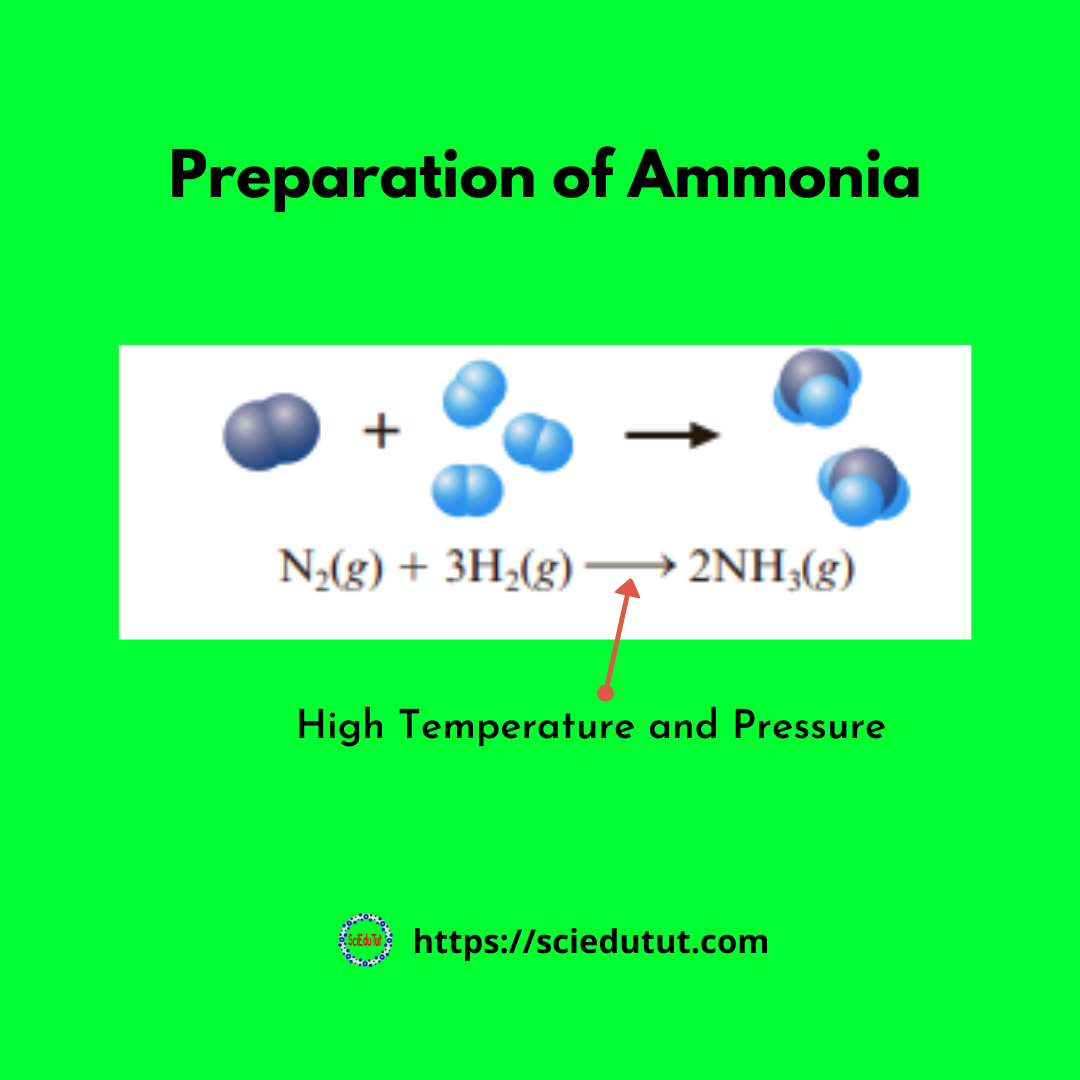 Definition of Polar and Nonpolar Molecules:

Chemical compounds use various types of bonds to bind their atoms and form molecules and macromolecules. Ionic, hydrogen, covalent, and metallic molecules are all made up of different forms of bonds. This bonds of molecules gives different properties to the compounds.

Definition of Ionic bond: When two atoms with opposite electric charges join to form a molecule, these bonds are formed. Two oppositely electrically charged atoms stabilize each other in this way. When there is a significant difference in electronegativities between two atoms, these types of bonds are used. In such bondings, the electrons are fully transferred from one atom to another. The energy associated with these types of bonds is the lattice energy of crystals.

Definition of Covalent bond: When two or more atoms exchange their electrons to stabilize each other in the bond of the molecule, these bonds are formed with mutual sharing of electrons. Depending on how many electrons are involved in the bond of the molecule, it may be single, double, or triple in organic molecules. These bonds may be polar or nonpolar in nature. This is mainly due to the geometrical structure of molecules and the arrangement of the types of atoms in their molecular structure.

Defining Polarity of NH3: What Does The Polarity Of NH3 Molecule?

The term polarity is most often used to refer to the Earth’s north and south magnetic poles in daily conversation. The south and north magnetic poles are located on opposite sides of the Earth’s altitude, facing opposite to each other in the magnetic needle box. Similarly, if you’ve ever looked at a battery, you’ll find that it has two terminal ends: a positive and a negative end. This is electrically called positive and negative polarity.

One end of a DC battery, for example, has a negative (-) charge, while the other has a positive (+) charge. Nitrogen and hydrogen atoms and the bonds that connect them, the bonds that make up an ammonia NH3 molecule, may all have polarity. If the constituent nitrogen and hydrogen atoms of the ammonia molecule are organized in such a way that one end of the ammonia molecule has a net positive charge and the other end has a net negative charge, the ammonia (NH3) molecule is said to be polar.

Water is one of the most well-known polar molecules on our planet Earth, and its polar existence allows it to bond with a wide range of other molecules through hydrogen bonding. This property enables it to act as the planet’s foundation for existence. In comparison to polar NH3 molecule, non-polar H2 molecule lack electrical poles and polarity. Nonpolar H2 molecule often have electrons that are distributed more evenly than polar NH3 molecule.

As mentioned above, ammonia NH3 forms three bonds with hydrogen atoms, leaving a single lone pair on the central nitrogen atom. The lone pair of nitrogen atom exerts a repulsive force on the three bond pairs N-H, according to the VSEPR theorem. 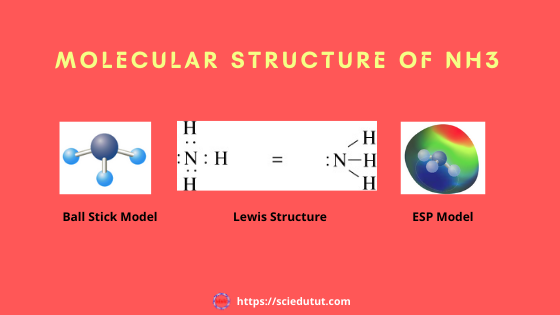 The overall molecular structural form of the NH3 molecule is a Trigonal Pyramidal configuration. The nitrogen atom is a central atom with asymmetric electric charge distribution, three bonds, and one lone pair on the central nitrogen atom, as defined by the position of the atoms in the ammonia NH3 molecule. These N-H bonds form a tetrahedral structure. In the NH3 molecule, the bond angle between N and H (H-N-H angle) is about 106.7 degrees.

In a molecule of water H2O, the bonds between hydrogen and oxygen atoms are distributed in such a way that there is equal space on both sides of the hydrogen-oxygen covalent bonds. Due to the equal spacing of the bonds in the water H2O molecule, one half of the molecule has a net positive charge in the hydrogen atom region, while the other half has a net negative charge on the oxygen atom region of the water molecule.

Although CH2Cl2 molecule has a low negative charge on hydrogen atom region, the excess of electrons in the C-Cl bonds causes them to have a negative charge overall net. Other polar molecules include hydrogen sulphide and SF4 molecule, in addition to CH2Cl2 and water molecule.

The three dipoles of the N-H bond pointing in the same direction form a net dipole moment, making NH3 a polar molecule. the central nitrogen atom of the NH3 molecule, becoming more electronegative in nature, draws the electron pair slightly against itself in the N-H bond, causing it to become partly negatively charged.

All hydrocarbon compounds are nonpolar in general, with the exception of carbon monoxide. Carbon monoxide is a polar molecule due to its composition. If any electronegative atom such as oxygen, nitrogen, and sulfufur attached to hydrocarbon, then hydrocarbon derivatives become more polar in nature.

Alkynes and noble gases (monoatomic gas) are examples of nonpolar molecules. Alkynes are more reactive than alkanes. Alkynes do not dissolve in water, whereas noble gases and inert gases are known as nonpolar since they are made entirely of the same element’s atoms. Noble gases are made up of elements such as krypton, neon, argon, and helium. Among all elements in the periodic table, noble gases are nonreactive in nature.

Why is NH3 a polar molecule?

The NH3 molecule is a polar molecule since it has three dipoles due to three bonds that do not cancel each other. They joined together to create a net dipole moment.

The lone pair on the nitrogen atom exerts an outward force on the bond, causing the form of NH3 to become asymmetrical, according to VSEPR theory. This force on the bonds is caused by lone pair-bond pair repulsion.

Nitrogen, becoming more electronegative, draws the electron pair slightly against itself in the N-H bond, causing it to become partly negatively charged.

Factors that determine the polarity of NH3 molecule

If two nitrogen and hydrogen atoms forming a bond in a covalent NH3 molecule have different electronegativities, they scatter unequal charges on them in the molecule, resulting in the bond’s polarity. That makes NH3 molecule is polar.

It’s also worth noting that the polarity of the N-H bond is proportional to the difference between the electronegativities of both nitrogen and hydrogen atoms respectively.

The dipole moment of the NH3 molecule is calculated by multiplying the charge over the nitrogen and hydrogen atoms by the distance between them.

The resulting dipole moment in NH3 is determined to be around 1.46D.

Since symmetrical compounds such as CO2 and BeCl2 are nonpolar in nature, the molecular structure of a complete often depicts its polarity. Molecules with a twisted or asymmetrical form such as H20 and CH2Cl2 are more likely to be polar in nature.

The dipole moments within symmetrically formed molecules are essentially canceled out of each other due to their molecular geometry. The dipole moment is a vector value with both definite magnitude and direction.

Predicting The Polarity Of NH3 Molecule

However, if the electric charges of any nonpolar molecule are uniformly distributed and circle at the central atom, the molecule is most definitely nonpolar. When we are trying to determine whether a molecule is nonpolar or polar, these characteristics of the molecule must be viewed together.

The geometrical structure of ammonia NH3 is tetrahedral since it is an asymmetrical molecule with three hydrogen atoms and one central nitrogen. The electronegativity value difference between nitrogen and hydrogen atom makes the N-H bond polar in nature, and all of the N-H bond’s dipole moments add up to a net dipole moment for the Ammonia NH3 molecule, rendering the NH3 molecule is polar.

In this article titled “Is NH3 polar or nonpolar”, I tried to make you guys understand the polarity of the ammonia NH3 molecule. If you have like this article, any questions, and queries regarding this article, you can ask them in the comment section. We will reach out to you with our answers as soon as possible.

FAQ on “NH3 polar or nonpolar”

Why is NH3 a polar compound?

Is NH3 polar or nonpolar atom closest to negative side?

NH3 (ammonia) is indeed a polar molecule, with an area of relative negatively charged at the top (i.e. the lone pair electrons) and a region of relative positive charge by the hydrogen atoms, due to partial charges not being uniformly distributed throughout the molecule.

Is NH3 polar or nonpolar ?

How to know if a Lewis structure is polar or nonpolar?

You can apply Octet rule for investigate Lewis Structure.

What is NH3 dipole moment