To understand molecular geometry, polarity, and other properties of a compound, one must first understand certain fundamental properties of the compound and its Lewis structure. Sulfur Tetrafluoride has the molecular formula SF4. Is SF4 polar or nonpolar? It’s a colourless, corrosive gas that’s used to make a variety of organofluorine compounds. SF4 is a toxic compound that is commonly used in chemical and industrial applications.

Is SF4 is polar or nonpolar? before answer this question, we need to understand the molecular geometry and Lewis structure of SF4. 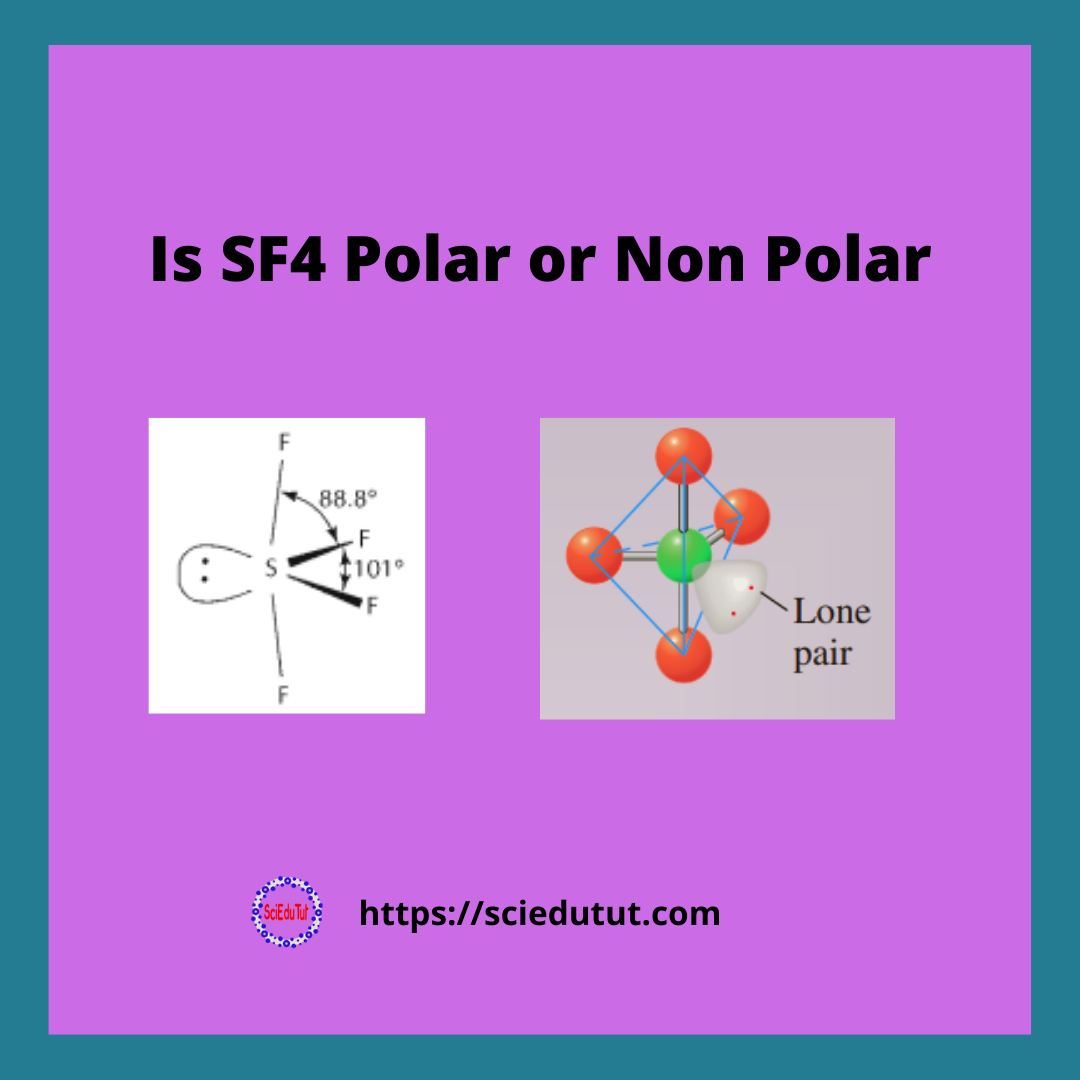 Using the molecular formula or the Valence shell electron pair repulsion theory (VSEPR) model, it is simple to consider the molecular geometry of a given molecule. A molecular formula can be used to determine the precise number and type of atoms in a compound. The compound contains one sulfur atom and four fluorine atoms, making it identical to the chemical formula of AX4E. 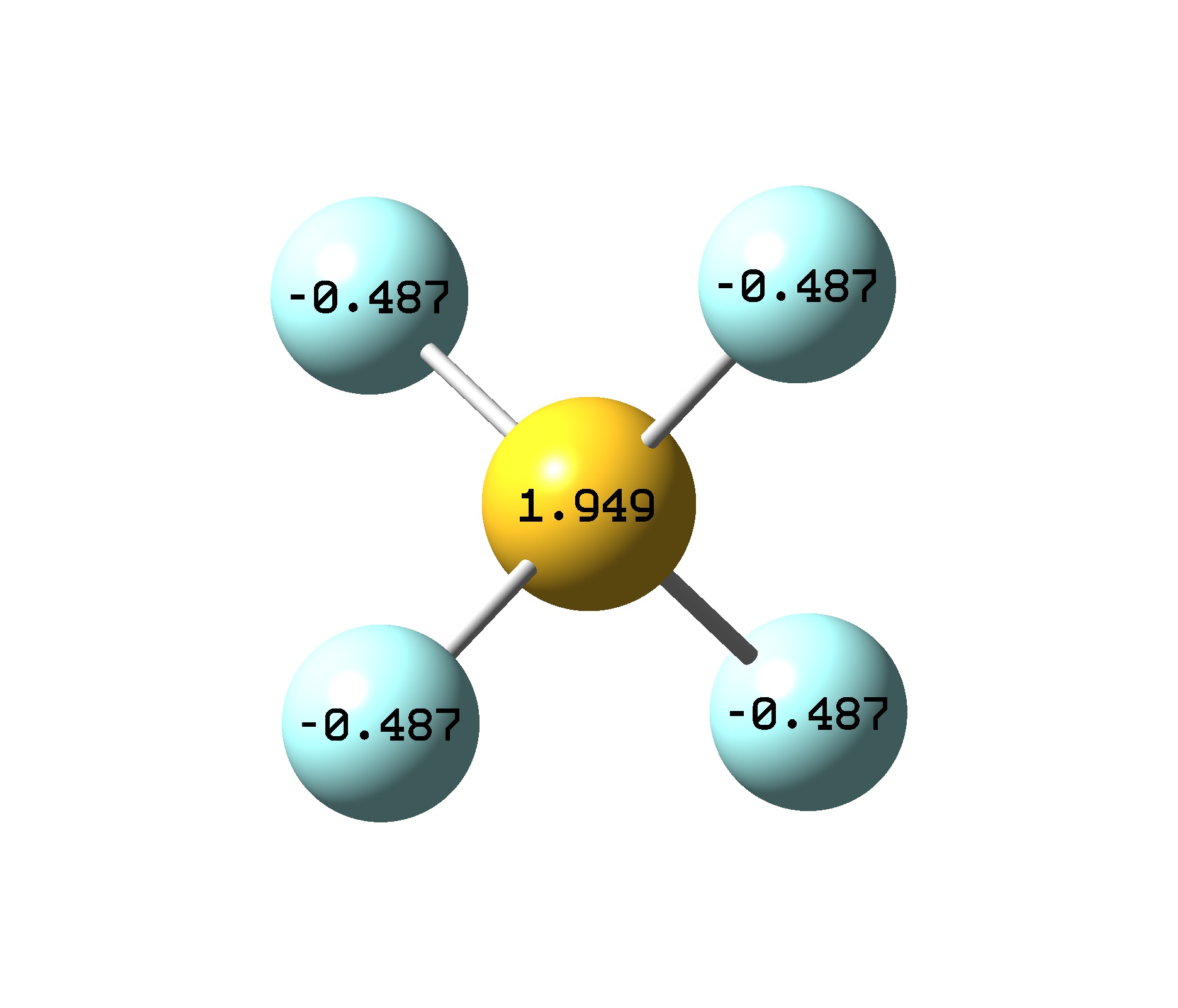 In the above figure, It is the molecular geometry of SF4. Yellow colour ball is sulfur atom and remaining four grey colour balls are fluorine atom. Mulliken charge distribution of SF4 is given in the figure. -0.487 e is distributed equally in all fluorine atom and 1.949 e is in the sulfur atom.

Trigonal bipyramidal molecular geometry is found in molecules with the molecular formula AX4E (E is lone pairs of electrons). The equatorial positions of two fluorine atoms forming bonds with the sulfur atom are seen, while the axial positions of the other two are shown. Since the central atom has one lone pair, it repels the connecting pair of electrons, slightly altering the form and giving it the appearance of a see-saw.

SF4 showed Trigonal bipyramidal structure with five number of electron pairs. SF4 has 4 number of bonding pairs and 1 non bonding pairs of electron. The molecular shape of SF4 is disphenoidal. Bond length of S-F bond in axial and equatorial are 164.6 and 154.5, respectively. Bond angle of F-S-F in axial to axial and equatorial are 167.0 and 101.6, respectively.

To maximise the molecule’s stability, the electrons adopt this pattern of structure, which follows the VSEPR law, to minimise the repulsion forces between the lone pairs of electrons.

And before we can draw the Lewis structure of SF4, we need to know how many valence electrons there are in the molecule.

And we need to know how many valence electrons there are in SF4 before we can draw the Lewis structure. It should obey the octet rule. Which is the basic for Lewis structure.

Now that we know how many valence electrons there are in the molecule, we can better understand how the atoms form bonds and how the molecule is put together.

In most of their molecular compounds, the representative elements or atoms to achieve noble gas configurations.

The above statement is usually called the octet rule for molecular compounds, because the noble gas configurations in the periodic table have 8 e in their outermost shells (except for He, which has 2 e). This is the stable configuration of an atom.

For the time being, we’ll limit our conversation to compounds containing the representative elements. We can’t write Lewis formulas with only the octet rule law. We also have to figure out how many of the available valence electrons are bonding electrons (shared) and how many are unshared electrons (associated with just one atom) across the bonded atoms.

A lone pair is a pair of unshared electrons in the same orbital. In this case, a simple mathematical relationship is useful:

The cumulative number of electrons exchanged by the molecule or polyatomic ion is denoted by the letter S.

N is the cumulative number of valence shell electrons needed by all atoms in the molecule or ion in order to obtain noble gas configurations (N = 8 X number of atoms that
are not H, plus 2 X number of H atoms).

By using the following step wise procedure as follows. The calculation of S = N – A in step 2 shows only 6 e shared, but a minimum of 8 e are required to bond four F atoms to the central S atom.

Step-1:
The SF4 molecule skeleton is

Now SF4 molecules have satisfied the octet rule, but we have used only 32 of the 34 e available. SF4 molecule placed the other two electrons on the central S atom. 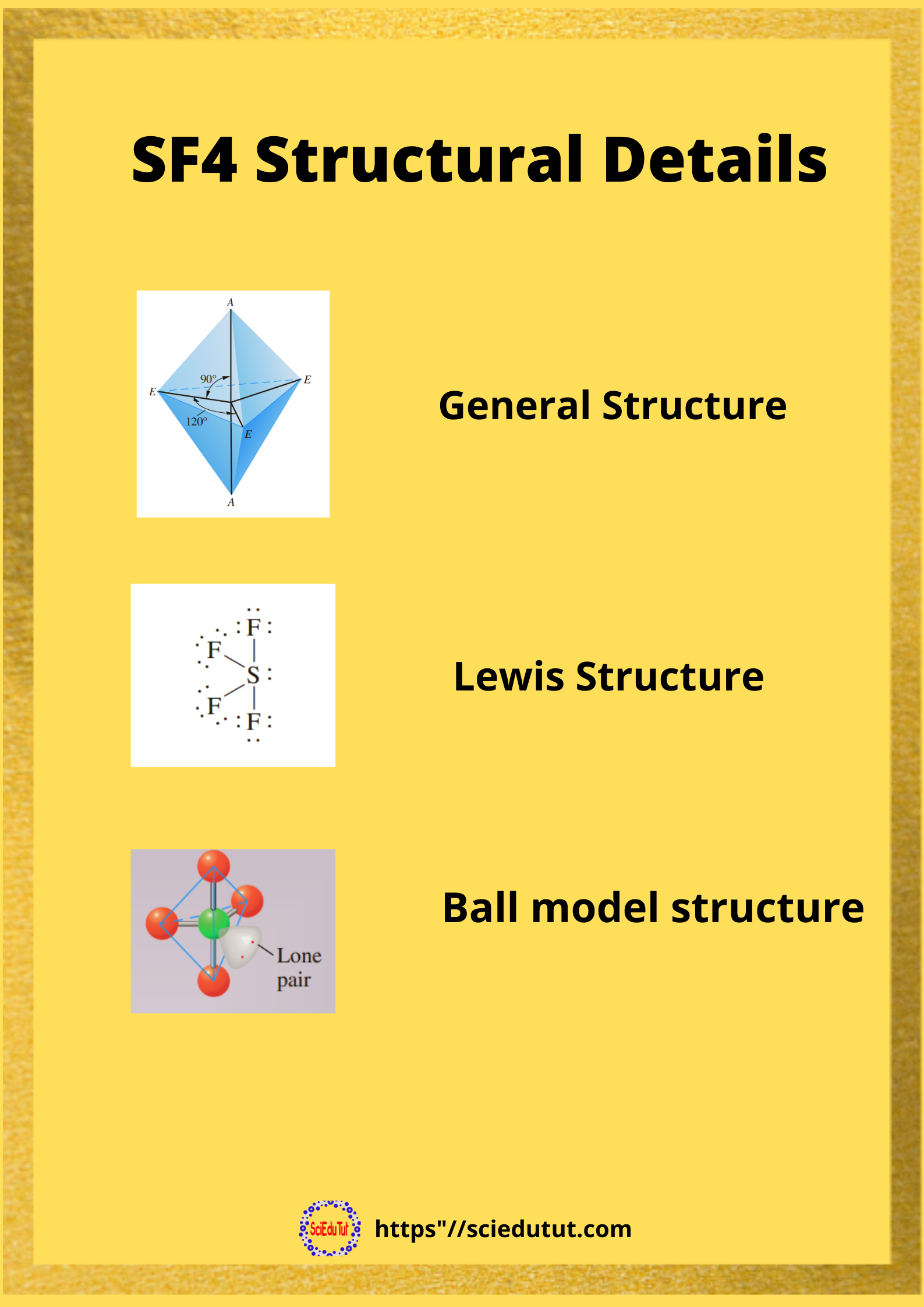 Is SF4 polar or nonpolar molecule?

Knowing the Lewis structure and molecular geometry of a substance makes depicting the molecule’s polarity much simpler. The asymmetric distribution of electrons on the central atom is caused by one lone pair on the central sulphur atom and four bonding pairs of electrons.

sulfur in the SF4 molecule in +4 state is converted to the +6 state, when SF4 molecule reacts with fluorine to form SF6 molecule. This is one of the best examples of oxidation and reduction reaction.

SF4 Hybridization in the molecular orbitals

Let’s start by looking at the electron density regions for the central atom to figure out how the SF4 molecule is hybridised.

With four bonding pairs of electrons and one lone pair, sulphur has a total of five electron density regions. As a result, the sulphur atom has five hybridised orbitals: one 3s, three 3p, and one 3d orbital. The sp3d hybridization is caused by the alignment of electrons around the atom and hybridised orbitals. The steric number can also be used to determine hybridization.

Thus, the steric strain in SF4 molecule is five due to lone pairs of electron also.SF4 molecule exhibit SP3 hybrization vert similar like methane molecule. But it has lone pair of electron, it induces polarity in the molecule.

The central sulphur atom has one lone pair of electrons and forms four bonds with the surrounding fluorine atoms. Fluorine atoms in the equatorial positions have bond angles of 102 degrees, whereas those in the axial positions have bond angles of 173 degrees, which vary from the trigonal bipyramidal molecular geometry that results in a see-saw pattern.

To summarise all of the properties, Sulfur Tetrafluoride has 34 valence electrons, of which four covalent bonds and one lone pair of electrons are formed on the central atom in its Lewis structure. On each fluorine atom, there are three lone pairs. It has the formula AX4E for its molecular geometry. It has sp3 hybridazation and having polarity.

FAQ on “Is SF4 polar or nonpolar?”

Is sf4 polar or nonpolar molecule

How to determine if a molecule is polar or nonpolar?

Polarity in molecules. Lewis structures are commonly used to decide whether a molecule is polar or nonpolar. Nonpolar materials will be symmetric, which means that all of the sides surrounding the central atom will be equal – bonded to the same element with no unshared electron pairs.

what is the molecular geometry of sf4?

Molecular Structure of SF4 is