Deprecated: Function Elementor\DB::is_built_with_elementor is deprecated since version 3.2.0! Use Plugin::$instance->documents->get( $post_id )->is_built_with_elementor() instead. in /home/u214178821/domains/sciedutut.com/public_html/wp-includes/functions.php on line 5383
 Best Overview on: Is XeF4 Polar or Nonpolar - Science Education and Tutorials Skip to content

Xenon (Xe) is a noble gas element in the periodic table. It is chemically nonreactive in nature. But at high temperature and pressure, it undergoes the reaction. The first compound of the noble gas element was Xenon Tetrafluoride (XeF4). In this post, we discuss “Is XeF4 polar or nonpolar ?”. This is a general question students of chemistry used to ask. Because Fluorine is a high electronegative halogen family element and polarizes the chemical bond.

The first binary chemical compound of a noble gas element was Xenon Tetrafluoride (XeF4). Because of its symmetrical square planar form, xenon tetrafluoride (XeF4) is a non-polar chemical compound in nature. Since the electronegativity value of the Xe and F atoms is unequal, the individual Xe-F bonds are polar in nature, but the net vector number of the polarities of the Xe-F bonds is zero because they cancel out along four opposite directions. As a result, XeF4 has a net dipole moment of 0 Debye.

The synthesis of XeF4 is the result of a mixing of reactant Xenon (Xe) and Fluorine (F2) gases in a specific ratio at a high temperature and pressure in an enclosed nickel vessel. The structure of this colorless, crystalline substance (XeF4) has been determined using analytical chemistry methods: F-isotope NMR spectroscopy and powder and single X-Ray crystallography. 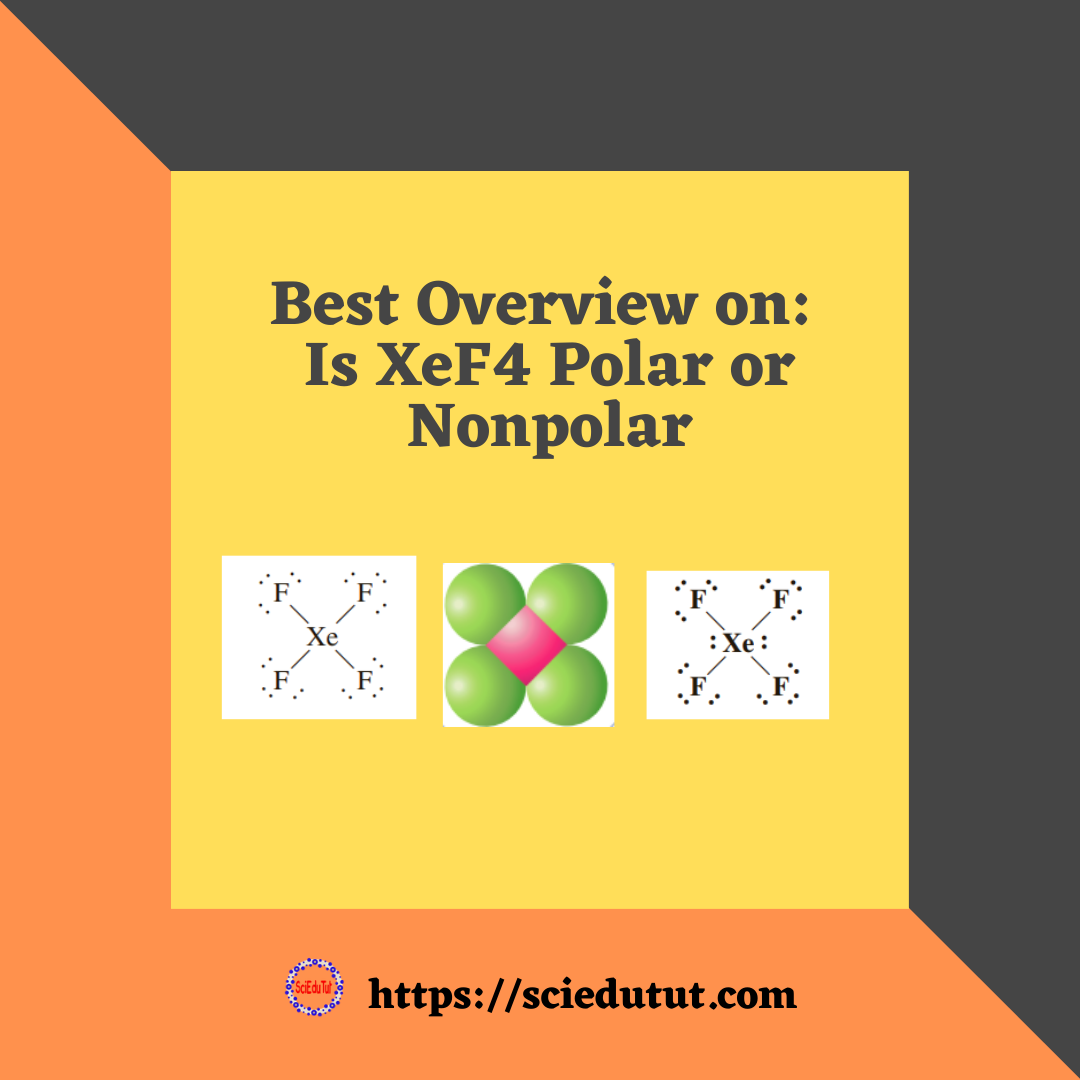 Xenon Tetrafluoride (XeF4) are synthesized by mixing of Xenon (Xe) monoatomic and fluorine(F2) gases of 1:5 volume ration at 873 K temperature and 7 bar pressure in an enclosed nickel vessel for 1 to 5 hours.

Nickel metal does not serve as a catalyst in this reaction. It’s only used because the Ni in the containers interacts with Fluorine in the reaction mixture, forming a defensive protective, and non-peeling coating of NiF2 (Nickel fluoride) on the tube or container’s inner walls.

In colorless solid form, the XeF4 has a density of 4.040 g/cm3 and has a solid white appearance. It appears as a colorless crystalline under normal conditions. It can undergo sublimation.

Difference between the electronegative value of Xenon(Xe) atom and Fluorine(F) atom gives some understanding about the polarity of Xe-F bond in XeF4 molecule.

One atom of Xenon and four atoms of Fluorine make up this Xenon tetraflluoride(XeF4) molecule. To evaluate the total number of valence electrons in XeF4, we can add the valence electrons of both these atoms by using an octet rule.

Valence electrons of Fluorine atom in XeF4 molecule = 7*4 ( as there are four Fluorine atoms, we will multiply it by 4) 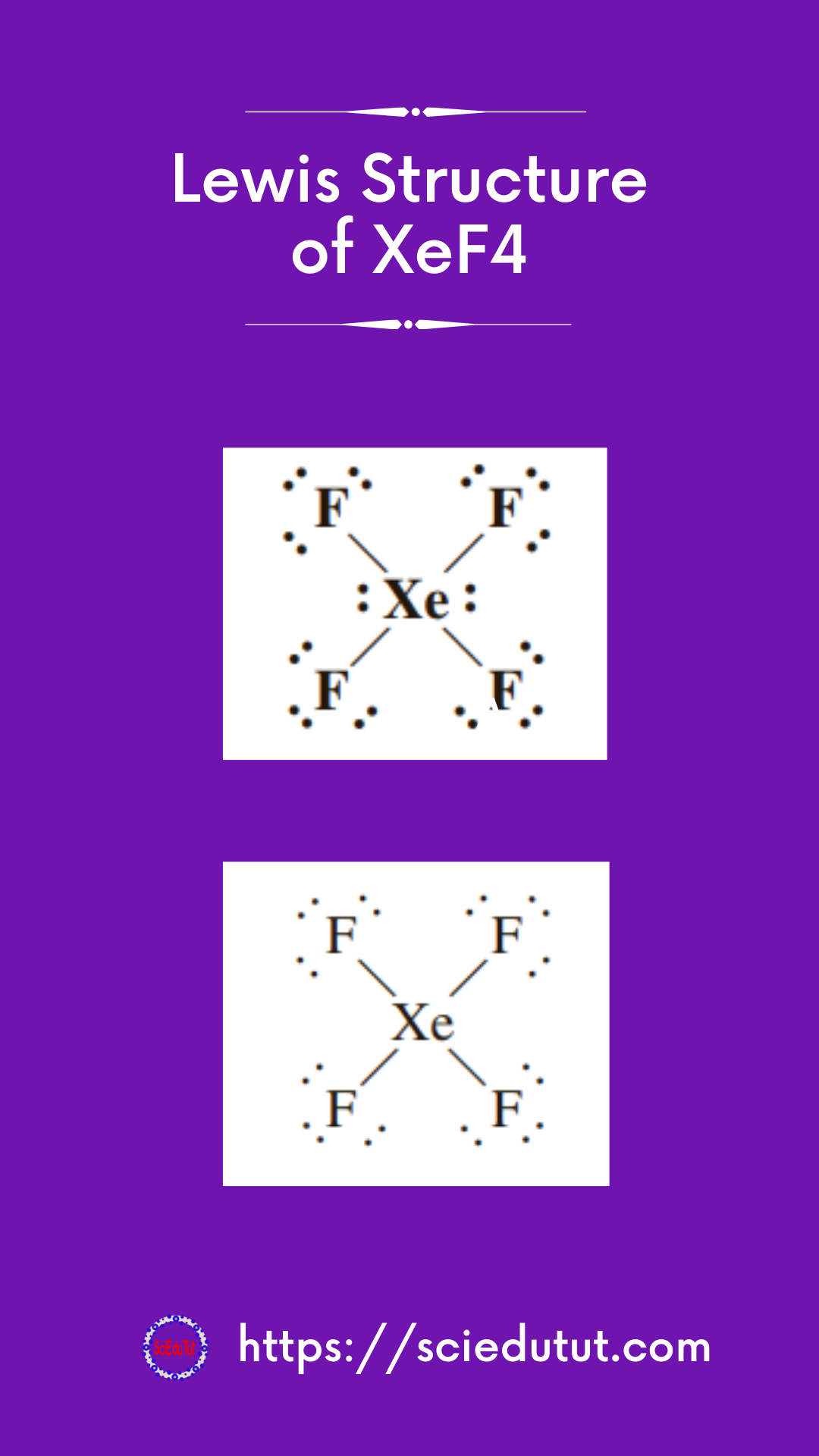 We’ll put Xenon in the middle and all the other fluorine atoms around it because it’s the least electronegative value atom in XeF4 molecule. Let’s demonstrate the bonds between each Fluorine and Xenon atom now that we’ve put all of the atoms in XeF4 molecule.

we’ve already placed 24 of the 28 electrons around the fluorine atoms of XeF4 molecule. Since Xenon in XeF4 molecule is an exception to the octet rule law, the remaining nonbonding electrons or lone pairs of electrons will be put on it.

Is XeF4 polar or nonpolar

The molecule is said to be polar if the dipole is a significant number (not equal to 0 Debye). Any molecule’s dipole moment, and thus its polarity, is essentially determined by the following factors:

XeF4 Molecules with a symmetric arrangement of atoms appear to have a vector number of dipole moments that is net-zero. This is because there would be another polar bond with a dipole of equal magnitude and the opposite direction for every polar Xe-F bond of the molecule, resulting in a net addition of zero.

As a result, symmetric XeF4 and BeCl2 molecules are non-polar in nature, while non-symmetric molecules such as SF4 are polar.

Type of bond in XeF4:

XeF4 molecule with Xe-F covalent bond is usually non-polar in nature. This is due to the polarity of Xe-F bond canceled each other the forces in its symmetrical square planar structure, which lead to a zero charge build-up at the XEF4 molecule’s poles.

Electronegativity value of atoms in XeF4:

Check out the article for more information on BeCl2 non-polarity. Any dipole moment of Xenon and fluorine formed in such XeF4 molecule is high and does not contribute to polarity establishment due to it canceled out in all opposite directions.

Because of the lone pairs of electrons between Fluorine and sulfur atoms, SF4 is a polar molecule. The article on the polarity of SF4 can be found here.

on the other hand, information regarding the polarity of the NH3 molecule is from here. More information on Lewis’s structure of H2O is here. 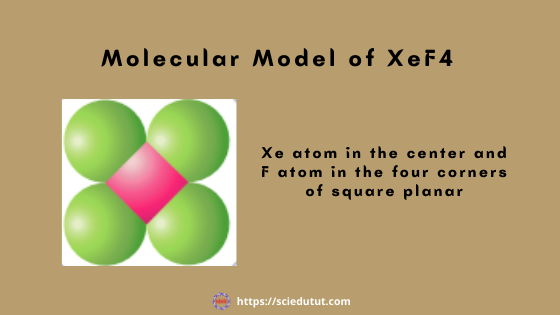 Applications and Uses of XeF4

XeF4 has very few applications in general. The following are a few of them as listed follows:

The molecule Xenon Tetrafluoride is one of those that is relatively simple to comprehend. Since all of the Fluorine atoms are arranged in a symmetric fashion, the Lewis structure of the XeF4 molecule is one of the simplest. To hold their repulsive forces to a minimum, the lone pairs in the molecule are arranged in an octahedral shape in a perpendicular plane.

In order to summarise this blog post, XeF4 has 36 valence electrons. The central atom of Xenon has two lone pairs of nonbonding electrons. The XeF4 molecular electron geometry is octahedral, and its elemental molecular geometry is square planar. XeF4 is a nonpolar molecule that hybridizes with sp3d2 hybridization.

Despite the fact that four individual Xe-F bonds are polar, XeF4 is a nonpolar molecule. The p[olarity of Xe-F bond of XeF4 molecule are cancelled each other in opposite direction . Since XeF4 has an octahedral symmetric electron geometry, this is the case.

Is XeF4 polar or nonpolar?

XeF4 is nonpolar molecule in nature, eventhough it has highly polarised Xe-F bond.

what shape would you expect for xef4?

Draw the lewis structure of Xecl4 showing all lone pairs.

what is the molecular geometry of XeF4?

what kind of bond is XeF4?

7 thoughts on “Best Overview on: Is XeF4 Polar or Nonpolar”